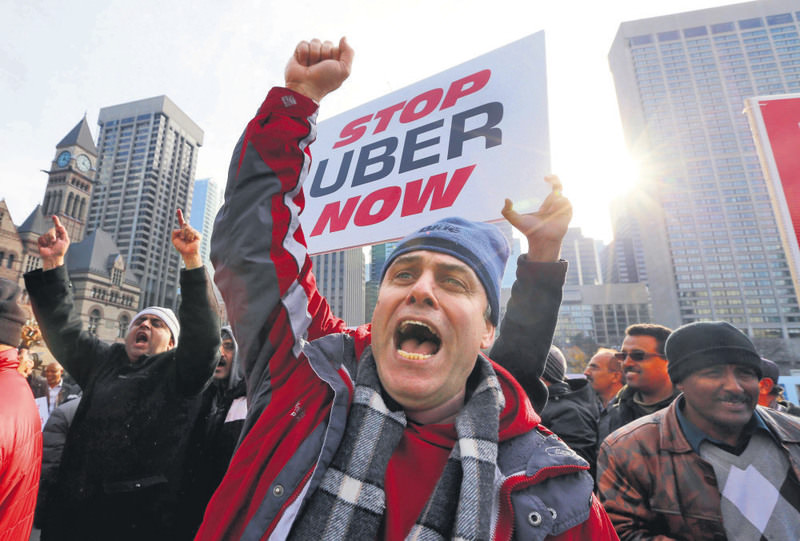 Taxi drivers protest in front of city hall against the Uber ridesharing car service in Toronto.
by Dec 22, 2015 12:00 am

From London and Paris to New Delhi and Sao Paulo, traditional taxi drivers united worldwide against Uber in 2015, a year that saw riots, legal battles and even a kidnapping in protest against the startup

But the company, now operating in 58 countries and valued at more than $50 billion, has suffered a bumpy ride on the road to success, infuriating conventional cab firms and battling regulators across numerous nations. The firm's safety standards have also been called into question after Uber drivers were accused of abduction and sexual attacks of female passengers in India and the United States. In many countries, cabbies say Uber represents unfair competition because its drivers are not subject to the often-strict rules and restrictions that govern conventional firms.

Their anger boiled over in 2015, notably in Paris where rioting by heavily unionized taxi drivers and the arrest of Uber executives in June led the startup to suspend its low-cost UberPOP service - six months after it was banned.

Licensed cabbies, who in some countries must undergo hundreds of hours of training, accuse Uber of endangering their jobs by flooding the market with cheaper drivers who only need a GPS to get around.

"Taxi drivers, alright - they've got big mouths - but normally they're not aggressive," said Malia, who has driven a taxi in Paris for three years said of the riots in the city, which included torching of cars.

"But these guys have families to feed, debts. They've been pushed to the brink."

Uber does not employ drivers or own vehicles, but instead uses non-professionally licensed contractors with their own cars, allowing them to run their own businesses. In London, 1,500 of the city's iconic black cabs blocked streets in September, while Mayor Boris Johnson raised drivers' ire after calling those opposed to new technology "Luddites."

Black cabbies spend three years studying for "The Knowledge," a grueling test that requires them to memorize every street in London before gaining a license, a tradition dating back to the 1800s. They say they are being squeezed by the popular, cheaper Uber.

In New Delhi, the ban authorities set out in the aftermath of the rape case has not been strictly enforced and Uber has continued to operate in the city. Traditional taxi drivers lounge on their black and yellow Ambassador taxis, a familiar sight in the Indian capital for generations, waiting for fares.

"I don't get customers for days. We sit idle for hours waiting for customers who book Uber even before they step out of their homes," Sharad Kumar, a driver for 27 years, said at a stand.

"Uber and other taxis are getting money from foreign companies and are providing services at much cheaper rates. We cannot compete with them," he said. The 53-year-old, who earns 15,000 rupees ($224) a month, acknowledged that old-style cabbies needed to embrace new technology to compete, but said they lacked funds to do so.

Simran Singh, 25, represents the new breed of taxi driver. He quit his job as a sales executive two months ago to become an Uber driver, using his own car, and now earns a daily wage of around $30 through fares and incentive payments, compared to around $22-a-day previously. "It's only been a few days but the earnings are promising," Singh said. In Turkey Uber has begun to operate in June 2015. Uber is especially preferred by Turkish customers who are complaining from the neglected, old and dirty taxis. Turkish taxi drivers are also starting to be anxious about Uber expansion. The Chamber of İstanbul Taxi Drivers announced they filed a complaint about Uber.

Uber pays sums on top of fares to woo drivers, part of aggressive expansion plans that this year saw it reach 22 cities in India alone, its largest market by cities outside the United States.
RELATED TOPICS