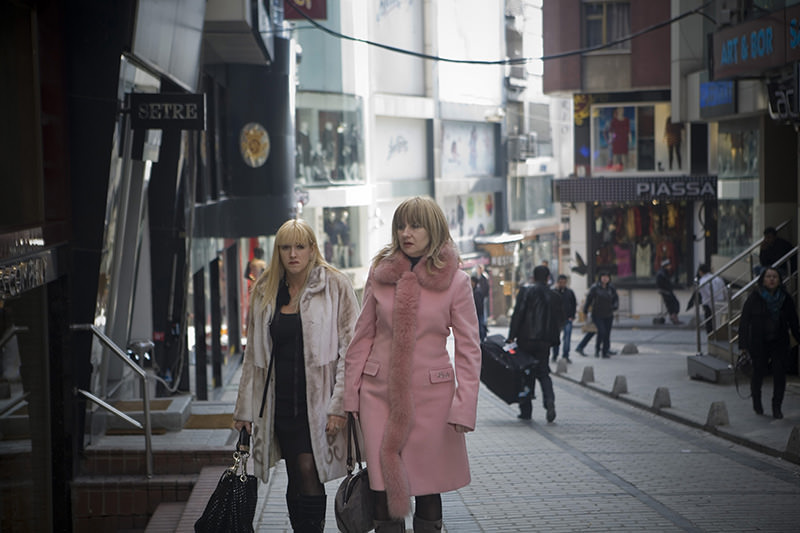 by Esra Biçer Dec 24, 2015 12:00 am
Tradesmen in Istanbul's district of Laleli, a crucial location for Turkey's leather and textile industry, were hit by Russian sanctions against Turkey after the downing of a Russian jet led to tensions between the two countries. However, tradesmen from the industry stress that they have been suffering not just since Russian sanctions were implemented but also since the economic crisis hit Russia. Due to the trend of tense relations with Russia, these tradesmen have been looking for alternative trading partners since 2013: with countries like Iran, Algeria, Morocco, Tunisia, Ghana and Brazil.

Last month, Turkey downed a Russian SU-24 jet that violated its airspace. In a furious reaction, the Russian government banned Turkish trucks from entering the country, making life difficult for Turkish businessmen living and working in Russia. Turkish exporters had to find alternative routes to reach countries like Kazakhstan and Kyrgyzstan and started to seek alternative trade partners.

The tradesmen of Laleli appear to be the most negatively affected by the sanctions, since they were known as the center of suitcase trade with Russia. Laleli market authorities indicated that they were already losing their trade volume with Russian partners before the downing of the jet on Nov. 24.

Estimated losses stand at around 80 percent in Laleli; however, a small part of these losses were incurred after the Russian warplane went down. The president of the Laleli Industry and Business Association (LASİAD), Gıyasettin Eyyüpkoca, said that in order to better understand the effects Russian tensions have on Turkey's textile industry, the past two years of trade history should be examined.

Previously, the Russian economy was in trouble because of commodity prices and European sanctions. Oil prices hit a11-year-low last week following a downward trend in the last one-and-a-half years. The energy-dependent Russian economy has lost around $100 billion, according to the Kremlin's finance ministry.

Furthermore, European sanctions against Russia, implemented in response to the Ukrainian crisis, passed the six month mark last week. The falling value of the Russian ruble also decreased the purchasing power of Russian consumers. Eyyüpkoca claimed that textile and leather producers in Laleli were faced with a 60 percent decrease in Russian trades. He also said that 20 percent of the aforementioned 80 percent loss was due to Russian sanctions along with seasonal weather factors.

"Trading companies involved with Russia are on the hook. If tensions continue, we may be talking about real damage," said Eyyüpkoca.

Textile and leather producers are now focusing on Iran, Algeria, Tunisia, Ghana and Brazil to recover their losses. After Iran's sanctions are removed, Turkish businessmen are looking to use their geographical position in the region to their advantage, with their second target being the Algeria-Morocco-Tunisia triangle, that has a free trade agreement in effect currently. Thethird target is Ghana, where a free trade agreement is shared with fifteen countries in the region and is the safest African country. Finally, Brazil is a key target as it is a developing country like Turkey.

The tradesmen of Laleli are not only concerned with their profits, but also with the fate of Turkish businessmen living and doing business in Russia. The LASİAD requests that the Turkish government support these businessmen to be able to maintain their businesses. The LASİAD also suggests that Turkish exporters working with Russia should be protected by easing tax payments and bank loans by postponing payment deadlines for six months. Governmental incentives provided for advertising, trade fairs and promotional activities should be increased in compensation for the emerging trading losses in the Russian market.

On the other hand, while we were promenading in the streets of Laleli, the market stagnation attracted our attention. There were fewer customers in the stores and a change to the customer profile of those we did see. Russian customers were predominant until just a short while ago, but they have now been replaced by Arab customers. . When we asked tradesmen if the cause of this stagnation is related to recent Russian tensions, we learned that, in fact, this situation has existed for a long time. This tension recently caused the cancellation of new orders. They expressed that, while nobody was able to find a shop to rent until one or two years ago, many stores are sitting vacant now.
Last Update: Dec 24, 2015 3:01 pm
RELATED TOPICS