2016 to be the year of ‘bull market' in Borsa Istanbul 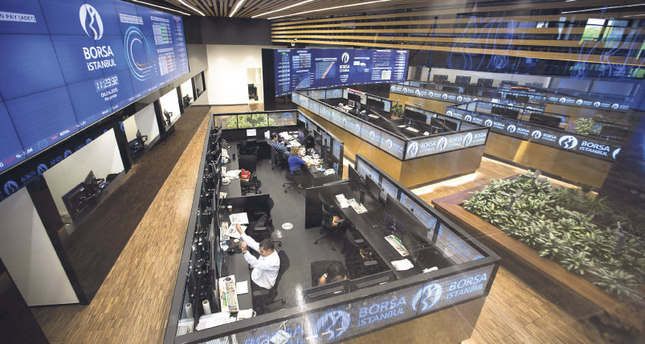 The Borsa Istanbul 100 index has performed a cycle of one-year up and one-year down since 5 years. Following the year of uncertainty, 2016 evokes curiosity about whether the index will reach to 93,000, realizing the best scenario

The Borsa Istanbul Stock Exchange's one-year up and one-year down cycle that has continued since 2011, as well as the annual estimates of analysts, indicates that 2016 will be the year of a 'bull market'. The up-and-down performance of the Borsa Istanbul 100 (BIST 100) index since 2011 has caused losses for investors one year and made them earn twice what they lost the year after. Following a 22 percent fall in 2011, the index soared by 52 percent in 2012, whereas it went into a decline once again in 2013 when it lost 13 percent of its value. Again in 2014, it made investors happy by achieving a 26 percent upsurge. In the last week of 2014, it lost 13 percent of its value when compared to the end of the previous year.

As markets strove to set prices under high volatility and uncertain monetary policy conditions in 2015, it is expected that the normalization process in monetary policies and expectations for global growth will prevail in 2016. Analyst estimates suggest the BIST 100 index will reach around 65,000 points in the worst-case scenario and around 93,000 points in the best-case scenario in 2016. The index is still at 25,000 points, which is a long-term supportive level on the dollar basis. It is expected that 2016 will be the year of a "bull market" where positive developments will be seen as well as pricing and upward trends will be stronger.

Speaking to Anadolu Agency (AA), Banu Kıvcı Tokalı, an investment counselor and research director at Halk Yatırım, said experts summarized the global expectations for 2015 under the topics of a more slowly growing world and global volatility, while expectations for domestic dynamics for 2015 signified that domestic balancing would be different in a world that grew more slowly.Tokalı said global estimates for 2016 are not so different from those for 2015, and experts base their expectations on a normalization process that would become clearer in 2016 adding that the normalization process will persist with questions about at what rate it will continue, rather than when it will formally start. According to Tokalı, in these circumstances high volatility environment might continue even if its dimension and frequency declines. As commodity prices continue to fluctuate in the face of growth uncertainties and different monetary policies, downward pressure might be felt more severely because of weak demand around the globe, particularly in China, she said.

According to Tokalı, the fact that the U.S. Federal Reserve's (Fed) normalization occurred during a moderate scenario highlighted the differentiation between commodity exports and imports to developing countries, and this might support markets. At this point, the reinvigoration of the reform process in Turkey might make investors' interest in the country permanent, she said.Tokalı said among various investment products, it can be advisable to distribute investor portfolios with a strategy where a macro perspective dominates, adding that a strong dollar and moderate commodity prices come to the fore as the main themes of differentiation between developing countries. We expect that downward pressure in copper and gold prices will be more clearly seen among commodities. As for shares, the glass, aviation, food and automotive sectors are safe, and we see share-based differentiations in sectors such as energy, oil, natural gas and retail she said.

Emre Sezan, a research manager at İş Yatırım, said markets are entering 2016 in an atmosphere where all risks are simultaneously priced out in accordance with a single measurement. Sezan stressed that if one or several of these risks do not occur, this might be an opportunity for investors. The most important risk factors stem from the fact that the slowdown in the Chinese economy, the depreciation of the Chinese yuan and the Fed's interest rate hike move is continuing, which might have a negative impact on capital flow into developing countries.

Touching on domestic risk factors, Sezan said Turkey might face risks due to the ongoing tension between Turkey and Russia, the negative impacts of Russia's economic sanctions on Turkey, the possibility of a referendum on a constitutional amendment and the concomitant election environment, as well as the fact that practices in reform programs fall short of fulfilling investors' expectations. The fact that valuations in markets reflect these risks even to a certain degree, provides an opportunity for investors, he added.

According to Sezan, it is expected that the BIST 100 index will stand at 93,000 points at the end of 2016. He said the important topical issues abroad in 2016 will be the path that the Fed will pursue in its interest rate increase cycle, the course of Chinese economic slowdown and its impact on other economies, the route that the European Central Bank (ECB) will follow in its monetary expansion policy and the removal of embargoes on Iran.
Underscoring that the path to be pursued in economic policies and the steps to be taken in structural reforms will be closely monitored in Turkey, Sezan said legislative changes that have been recently made to the Basel III criteria adaptation process will take effect in March 2016. These changes might negatively affect the capital adequacy ratio of banks; however, these negative impacts can be compensated by amending some current practices that run against the Basel II criteria.

Sezan also said the term of office of the Central Bank of the Republic of Turkey (CBRT) Governor Erdem Başçı, will end in April 2016, and the question of whether his term will be extended or who will replace him will be an important development that markets will watch closely. Additionally, a possible referendum on the constitutional amendment might occupy the domestic agenda for a long time, he said.
Last Update: Jan 02, 2016 1:18 am
RELATED TOPICS