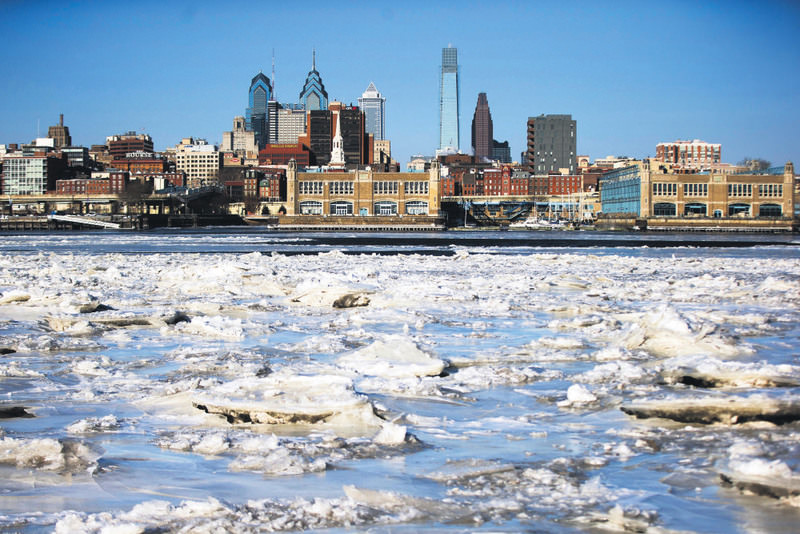 Ice collects on the Delaware River in view of Philadelphia, PA. Last year saw the lowest financial costs from natural disasters worldwide since 2009 as the El Nino phenomenon reduced hurricane activity in the N. Atlantic. (AP Photo)
by reuters Jan 05, 2016 12:00 am

Insurance claims from natural disasters such as storms and earthquakes fell to $27 billion in 2015 as the overall cost of natural catastrophes dropped to its lowest level since 2009, reinsurer Munich Re said yesterday.

The climate phenomenon known as 'El Nino' last year helped reduce the development of hurricanes in the North Atlantic, which traditionally cause some of the heaviest claims for the insurance industry, the world's largest reinsurer said in its annual review of natural catastrophes.

"We were somewhat fortunate in 2015: strong tropical cyclones frequently only hit sparsely populated areas or did not make landfall at all," said Peter Hoeppe, the head of Munich Re's Geo Risks Research Unit. Reinsurers act as a financial backstop to insurance companies, paying a chunk of the big claims for storms or earthquakes in exchange for part of the premium. Lower claims payouts boost insurance industry profit but have a downside for reinsurers, whose insurance company clients often then demand lower prices for reinsurers' backing.

Reinsurance broker Willis Re yesterday said reinsurance prices continued to fall for contracts taking effect at the start of 2016 and that predictions of an end to the multi-year decline had proved illusory.

"The January renewals have unfortunately confounded the hopes of commentators that the market was reaching a pricing floor," Willis Re Chief Executive John Cavanagh said. However, an international effort announced by Bank of England Governor Mark Carney to quantify insurance risks businesses face from climate change could eventually boost

In the meantime, Munich Re warned that the El Nino effect might be reversed this year, bolstering hurricane activity. Munich Re said floods in the U.K. and Scandinavia from storm

Munich Re's natural disaster review showed that overall economic damage last year fell to $90 billion from $110 billion, again well below the 10-year average of $180 billion. The review gave no claims figures for Munich Re itself. The reinsurer is due to report 2015 results on Feb. 4.
RELATED TOPICS