Chinese stocks battered in another rough day for Asian markets 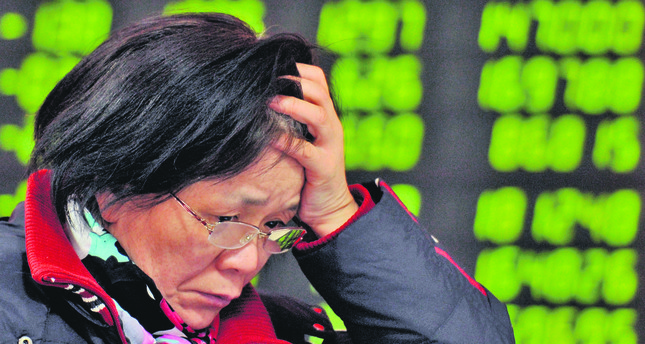 by Daily Sabah with Wires Jan 12, 2016 12:00 am
Chinese shares fell sharply Monday, leading a rout of Asian equities, after a volatile period of trading last week that saw the mainland's primary exchanges shut down twice. Investors have been alarmed by slowing growth in the world's second-largest economy, which is expected to have expanded last year at its slowest pace in a quarter of a century. Official data on the fourth-quarter and annual growth is due to be released next week. The government said on Saturday that China's consumer price inflation came in at 1.6 percent in December, well short of the government's target of "around 3 percent." The benchmark Shanghai Composite Index closed Monday down 5.33 percent at 3,016.70. The Shenzhen Component Index lost 6.21 percent at closing, while the ChiNext Index, which tracks China's NASDAQ-style board of growth enterprises, closed down 6.34 percent.

The Hang Seng fell at the opening bell on news that inflation data released by the Chinese government over the weekend was below the government's target.

In mainland China, heavy losses last Monday and Thursday had led to an automatic shutdown on the main Shanghai and Shenzhen exchanges, sending shockwaves through world markets.

The so-called "circuit breaker" responsible for the shutdowns was suspended by the securities regulator late on Thursday.

Chinese shares had closed higher Friday, but analysts said state-controlled funds may have purchased equities in order to stabilize the market.

"The circuit breaker was not the main reason for the current panic. The fundamental reasons are the economy itself, poor performance of listed companies and the currency exchange rate drop," said Ye Tan, a Shanghai-based independent analyst. The Asia losses come amid doubts about the overall strength of the region's biggest economy, and the world's second-largest. Since last week, the Shanghai index has plunged 10 percent, wiping out all stock market gains from 2015.

"However a situation like last summer should not happen again because at that time it was deleveraging that caused the crash," Ye said.

Chinese stocks slid more than 30 percent from a peak in June over a three-week period last year, prompting a raft of government measures over the following months, including the suspension of new listings, establishment of rescue funds, and allowing pension funds to invest more in stocks. The main indexes in South Korea, Taiwan and Australia also ended down on Monday. A national holiday meant there was no trading in Japan.
Last Update: Jan 12, 2016 1:27 am
RELATED TOPICS