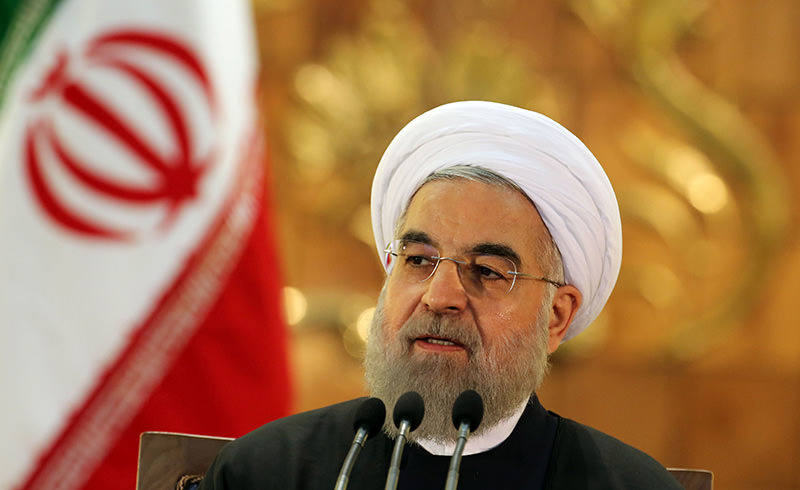 Iranian President Hassan Rouhani speaks during a press conference on January 17, 2016 in the capital Tehran (AFP Photo)
by Daily Sabah with Wires Jan 18, 2016 12:00 am

It took less than a day for the U.S. to impose new sanctions on Tehran, claiming that the ballistic missiles tested by Iran could carry atomic warheads. Still, the removal of old sanctions will breathenew life into the Iranian economy while further pushing oil prices down

Iran on Monday denounced as "illegitimate" new sanctions imposed by the United States (U.S.) on Monday on companies and persons associated with Iran's ballistic missile program, only days after the beginning of the implementation of Tehran's historic nuclear deal with world powers. "Iran's missile program was never designed to be capable of carrying nuclear weapons," foreign ministry spokesman Hossein Jaber Ansari said, according to the ISNA news agency. He added that Tehran saw fresh economic sanctions as "illegitimate."

The U.S. imposed sanctions on 11 companies and individuals on Sunday for supporting Iran's ballistic missile program, a move delayed by two weeks so as not to endanger the lifting of far more comprehensive nuclear sanctions and the release over the weekend of Iranian-held American prisoners.

Five Iranian nationals and a network of companies based in the United Arab Emirates and China were added to an American blacklist, the U.S. Treasury announced. The U.S. imposed the fresh sanctions due to concerns that the ballistic missiles tested in October by Iran could carry atomic warheads, a claim Ansari argued yesterday was baseless, saying, "The missiles were intended for defense purposes and posed no threat to other countries."

"As previously announced, the Islamic republic of Iran... responds with determination to such propaganda by accelerating its legal ballistic missile program and boosting defense capabilities," Ansari said.

Ansari said Washington's sales of weaponry to allies in the Middle East, estimated at tens of billions of dollars each year, was used to commit what Ansari described as "war crimes against Palestinian, Lebanese and most recently Yemeni citizens." He added, "The U.S. sanctions against Iran's ballistic missile program... have no legal or moral legitimacy."

Iranian conservative newspapers Kayhan and Vatan-e-Emrooz splashed the news on their front pages, crowding out a triumphal speech by President Hassan Rouhani, who had on Sunday hailed the lifting of the nuclear sanctions. "Sanctions are back!" ran the headline in Kayhan, saying that Tehran's top authority, Supreme Leader Ayatollah Ali Khamenei, had said new sanctions under any pretext would constitute a breach of the nuclear deal.

The U.S. and Iranian presidents on Sunday hailed the implementation of Tehran's nuclear deal as historic, even as new American sanctions threatened fresh tensions. The United Nation's atomic watchdog confirmed in Vienna late on Saturday that Iran had complied with its obligations under last summer's accord, leading the U.S. and the European Union to lift sanctions.
Iran's President Hassan Rouhani, a moderate whose 2013 election victory helped launch a huge diplomatic effort toward the deal struck on July 14 in Vienna, said the implementation was a crucial moment for his country. "We Iranians have reached out to the world... have opened a new chapter in the relations of Iran with the world," the official IRNA news agency quoted Rouhani as saying.

In Washington, President Barack Obama said the breakthrough was vindication of his controversial policy of engagement. "We achieved this through diplomacy, without resorting to another war in the Middle East," he said in an address to the nation. But Obama also noted that "profound differences" with Tehran remained over what Obama termed "destabilizing activities." As an indication of those differences, Washington announced it had decided to target the Islamic republic's ballistic missile program with new targeted sanctions.

The White House had threatened to impose the measures last month but withdrew them after Rouhani hit out at both their timing and intent, saying that missiles were not part of the nuclear agreement. Asked before the new sanctions were announced how Iran would react to fresh measures against it, Rouhani said on Sunday, "Any action will be met by a reaction."

The new sanctions came after four Iranian-Americans, including Washington Post reporter Jason Rezaian, were released in a prisoner swap with the U.S. The exchange involved Rezaian, Christian pastor Saeed Abedini, former U.S. Marine Amir Hekmati and a fourth man, Nosratollah Khosravi-Roodsari. Iranian state television said they departed on a special plane to Bern in Switzerland, but U.S. officials told American media that Khosravi-Roodsari was not on board.

The three Americans arrived at a U.S. military base in Germany after a brief stop in Geneva, a U.S. official said. Under the exchange, Washington said it had granted clemency to seven Iranians, six of whom were dual U.S.-Iranian citizens, and dropped charges against 14 others. Obama welcomed the Americans' release, saying: "When Americans are freed, that's something we can all celebrate."

The Organization of Islamic Cooperation (OIC) has urged the international community to work towards establishing a nuclear-free zone in the Middle East as it welcomed Iran's nuclear deal with world powers. In a statement on Sunday, the organization expressed hope that "all parties respect this [Iran nuclear] agreement and its obligations under international law, and what was stated by the international conventions and treaties." The statement called for member states to "contribute to the restoration of international peace and security".
Last Update: Jan 18, 2016 8:07 pm
RELATED TOPICS