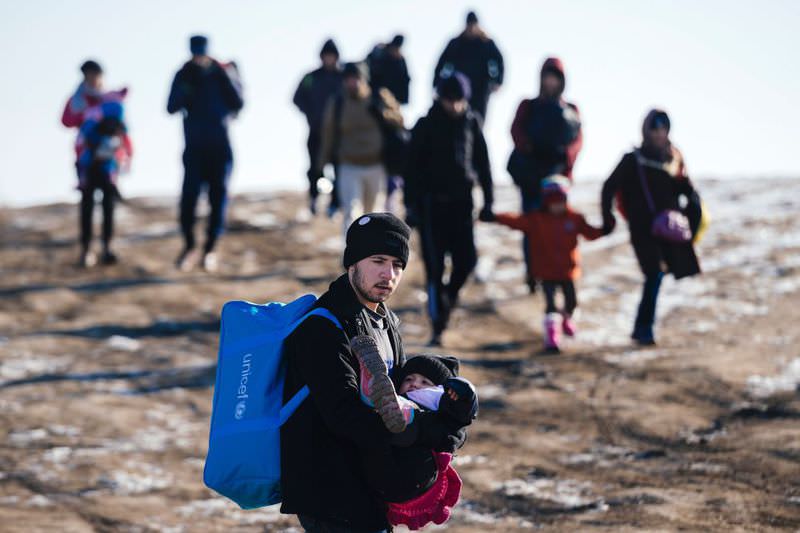 A man carries his child as they walk with other migrants and refugees after crossing the Macedonian border into Serbia near the village of Miratovac on Tuesday.
by French Press Agency - AFP
Jan 21, 2016 12:00 am

The International Monetary Fund says that despite the rapid flow of refugees can boost economies swiftly in the short run, for long-run benefits, they should be fully integrated into the economic system

The tide of Middle Eastern refugees should boost European economic growth over the short term, but their longer-term impact will depend on efforts to integrate them, the IMF said Wednesday.

In a new study to be presented at the World Economic Forum in Davos, Switzerland this week, the International Monetary Fund said that governments making strong efforts to bring refugees into the workforce can lessen the chance that they will become a burden on the state budget. "Quick labor market integration can unlock the potential economic benefits of the refugee inflow," said the IMF study, "The Refugee Surge in Europe: Economic Challenges."

"It would also minimize the risk of social exclusion for the newcomers and maximize their net contribution to the public finances in the longer term." The report comes as governments across Europe wrestle with the political, social and economic implications of admitting huge numbers of migrants fleeing the conflicts in Syria and elsewhere.

More than 1 million refugees flooded into Europe last year seeking asylum, and in many countries, the administrative apparatus for handling such a large influx is overwhelmed.

Focused solely on the economic impact, the IMF study said economies in countries receiving the migrants would grow more at the initial stage, due to public spending to accommodate them.

That could add 0.1 percentage point to GDP growth by next year over the 28-nation European Union, but more in the countries with the largest numbers of newcomers.

However, the IMF said: "In the long run, the economic impact will depend on the speed of integration of refugees into the labor market."

The study acknowledged the deep worries over the possibility of migrants taking away local jobs, especially in a period of already elevated unemployment.

But it said studies of previous episodes of migrant influx show that the impact is usually not that substantial on opportunities for native workers.

"Past experience with both economic and humanitarian immigration indicates that adverse effects on wages or employment are limited and temporary, possibly because of low substitutability between immigrants and native workers." But there is a possible exception in the case of Syria, in that a large percentage of the refugees is well-educated, with one-fifth reporting having tertiary educations. The study also said, however, that the increase in the workforce size "usually" leads to an increase in investment.

The other big worry is that the newcomers will stay unemployed and become burdens on the state, raising fiscal costs for the government. This can be avoided by quickly clearing restrictions and barriers to the migrants taking jobs, the IMF said. That could include allowing them to take jobs while awaiting asylum approval; providing wage subsidies to employers willing to hire them despite lower skills; and creating exceptions to minimum wage rules to allow their entry into the job market.

Another key suggestion would be to allow the refugees more mobility in the region, to move to places where opportunities to work are highest. "Migrants tend to go where unemployment is low," the study said.