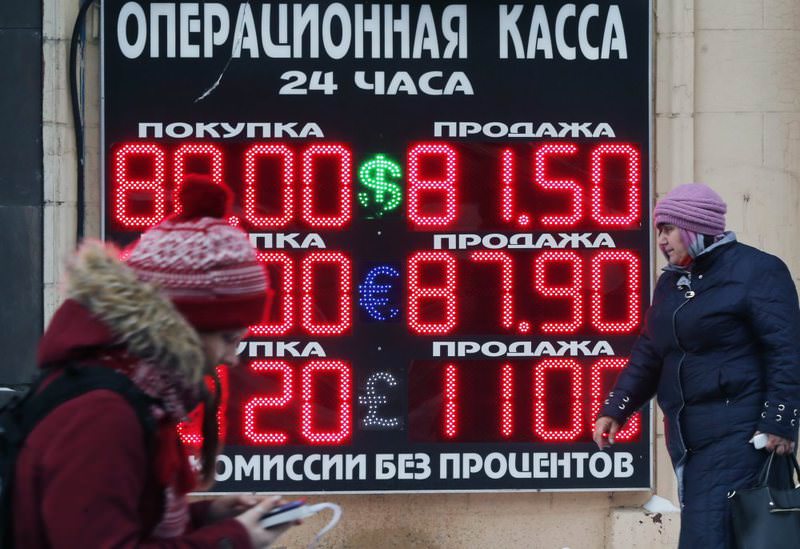 by reuters
Jan 21, 2016 12:00 am
The Russian rouble struck a new record low Wednesday as fresh falls in world oil prices deepened investor worries about Russia's contracting, commodity-dependent economy. The rouble was trading down 3 percent at 81.01 to the dollar at 1340 GMT after earlier reaching a historic low of 81.07. It was 3.1 percent lower versus the euro at 88.44. The previous all-time low was 80.10 roubles per dollar, reached in December 2014 when Russia was in the grips of a financial crisis exacerbated by Western sanctions over the Ukraine crisis.

Analysts said the rouble was likely to remain on the ropes as long as oil prices continue their decline but that the central bank was unlikely to intervene to defend the currency unless financial stability was threatened. "The rouble is trading on oil and risk sentiment," said Tom Levinson, chief forex strategist at Sberbank CIB, the investment-banking arm of Russia's largest lender Sberbank. "Despite arguably offering good value at this level, no one is going to become neutral or positive on the rouble without signs of a recovery in oil prices."

In contrast to the situation 13 months ago, there was no sign of panic buying of dollars on Moscow streets yesterday - a factor likely to prevent the central bank taking active steps to defend the currency.

Many Russian consumers, having spent months already watching the value of the roubles in their pockets fall, have adopted a fatalistic approach to the currency's decline. But the rouble's slide makes it more likely the central bank will have to postpone interest rate cuts badly needed to breathe new life into the economy. In a country where many consumer goods are imported, the rouble's drop will also push up inflation, testing so-far robust public support for President Vladimir Putin in a year when Russia holds a parliamentary election.

The central bank cut rates aggressively in early 2015 to ease the impact of an economic recession but has been forced to leave them on hold since July, despite prospects for the economy remaining grim. Russia's economy shrank an estimated 3.9 percent last year and the International Monetary Fund forecast on Tuesday another 1 percent contraction in 2016. The bank next meets on monetary policy on Jan. 29, and market expectations have recently shifted towards a "hold" decision.

The deep pessimism on Russian markets mirrored falls on Asian and European stock markets. Almost $6 trillion has been wiped off the value of global stock markets since the start of the year, and worries over the health of the global economy are growing. For Russia, the roughly 25 percent fall in Brent crude oil prices since the start of the year is particularly painful, since oil is the key Russian export. The central bank said yesterday, however, that the rouble's weakening had an "objective character" and was taking place "smoothly", implying it will stick to its policy of allowing the currency to float freely. The rouble, by comparison with the oil price, is down by a less severe 9 percent against the dollar since the start of 2016, in part as it had fallen so steeply since late 2014. Brent was trading 2 percent weaker at $28.2 a barrel at 1340 GMT, not far from its weakest since 2003.

Ruslan Pshonkovsky, head of treasury at Eximbank of Russia, said the rouble's losses on Wednesday were probably exacerbated by stop-loss orders once it traded beyond 80 per dollar.

Pshonkovsky said the fact that forex demand remained relatively weak, in part due to an easier foreign debt repayment burden for Russian firms in 2016, meant the rouble was unlikely to collapse. But Vasileios Gkionakis, global head of FX strategy at UniCredit in London, said: "At these levels I wouldn't want to be involved in the rouble, it can be very volatile."