PM Davutoğlu meets with top investors in Davos, citing projects worth $3B 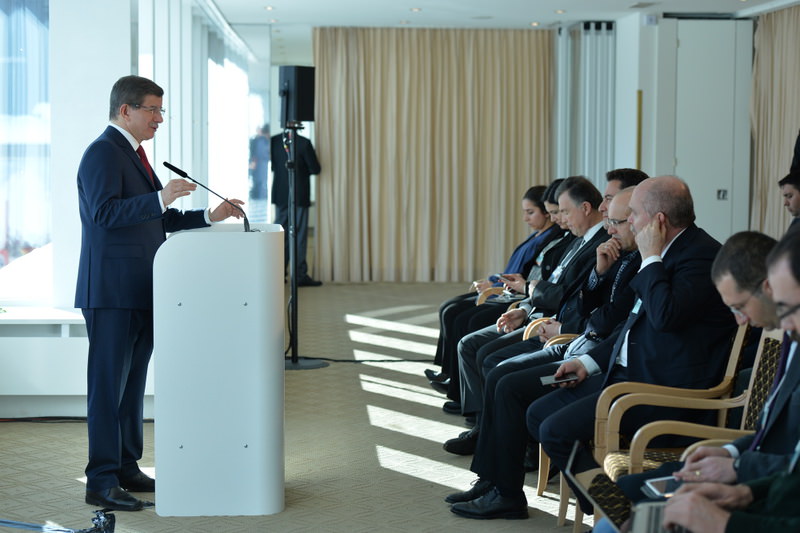 Prime Minister Davutou011flu (L) at a press meeting in Davos, where he is attending the World Economic Forum.
by Daily Sabah with Wires Jan 22, 2016 12:00 am

Prime Minister Davutoğlu continues to hold meetings with top international investors in Davos as a part of the government's plan to improve the investment environment, citing projects in the fields of finance, infrastructure, logistics and industry

Prime Minister Ahmet Davutoğlu met the CEOs of international companies, which have a total market size of more than $4 trillion, as a part of the talks he held at the World Economic Forum (WEF) in Davos, Switzerland. Davutoğlu addressed projects with a total value of more than $3 million that mainly consist of investments in finance, infrastructure, logistics and industry.

A number of foreign investors from Japan, China and Malaysia, as well as from the United States and Europe that directly invest in Turkey, will hold talks with Davutoğlu during the Davos summit, as they have taken a greater interest in the country since the Nov. 1 parliamentary elections.

"The Improvement of Investment Environment," which is cited in the 2016 Action Plan of the 64th government, is another topic that attracts the attention of international companies to Turkey. Davutoğlu and foreign investors talked about Article 80 and Article 142 of the Action Plan, which concern encouraging corporate companies in capital markets and public-private partnership projects, respectively. Prime Ministry sources said investors take a great interest in Article 71, which is aimed at attracting foreign direct investments into Turkey.

Davutoğlu attended a nightcap, which is the hallmark of Davos summits and was attended by U.S. presidents in the past. Saudi Arabian banker Khalid Abdulla Janahi and Turkish businessman Mehmet Çelebi organized the program, which was moderated by CNN International's Christiane Amanpour.

The World Economic Forum (WEF) in Davos, Switzerland is hosting a replica of the world's oldest temple to introduce participants to Turkey.

Around 2,500 participants will attend the WEF, including businessmen, bankers, lecturers and politicians. These were introduced to the world's oldest known temple, "Göbeklitepe," which is located in the province of Şanlıurfa in southeastern Turkey.

Replicas of 12,000-year-old stone blocks found in Göbeklitepe were exhibited at the gala night, organized by Doğuş Group CEO Ferit Şahenk to promote Turkey's culture and history. Real-size replicas of sculptures and other artifacts have been created as a part of the project. Göbeklitepe is not only known for the oldest known temple in the world, it is also home to the oldest known area for agricultural activities and was included on UNESCO's World Heritage list in 2011.
RELATED TOPICS