Turkish Airlines to take off with Batman v Superman deal 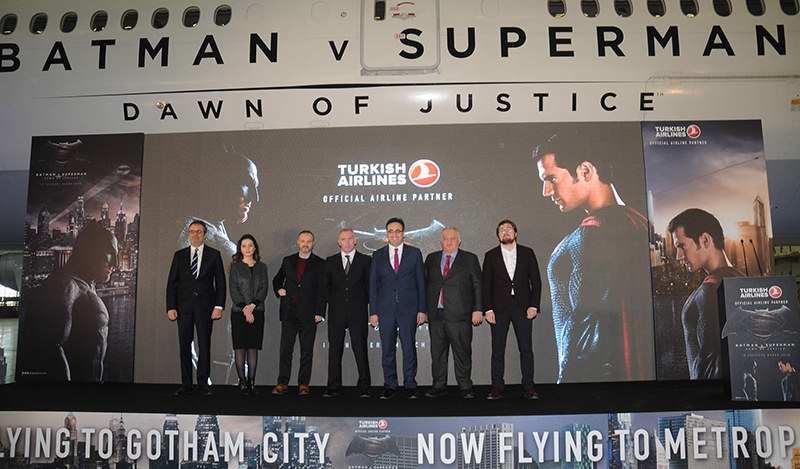 | Sabah Photo
by daily sabah Jan 25, 2016 12:00 am
The national flagship carrier Turkish Airlines (THY) signed a deal with Warner Bros. for a sponsorship deal for the upcoming film "Batman v Superman: Dawn of Justice." The deal was announced on Monday in Istanbul at a press conference where a THY plane painted with the emblems of the two superheroes was showcased.

The deal includes the use of a Boeing 777 THY plane in a pivotal scene of the film scheduled to open in March as well as broadcasting of a THY commercial starring Ben Affleck and Jesse Eisenberg who play Batman and Lex Luthor, respectively, in superhero-studded film pitting two iconic titular characters against each other.

Speaking at the press conference at a THY hangar, the carrier's chairman, M. İlker Aycı, said THY joined the official sponsors for the film at its United States and United Kingdom premieres. He said the sponsorship deal was important for them as it was for a film with a budget of $350 million and one of the biggest Hollywood productions this year.

The sponsorship is among efforts by the Turkish carrier to extend its brand recognition. It already had a soaring success promoting it with commercials starring prominent basketball and soccer players Kobe Bryant and Lionel Messi that made it onto the lists of the most-viewed advertisements on video-sharing websites.

"We are excited to sponsor one of the most anticipated films of 2016 and I believe it will help the recognition of the THY brand," Aycı told reporters. Aycı said the carrier made a great leap in the past decade and was voted as the best European airliner in the past five years and also holds the title of the airliner flying to the most destinations. "We had two more cities to add to this list, but it was difficult to obtain permission of the authorities in those cities dominated by two powerful men: Bruce Wayne and Clark Kent," Aycı jokingly said as he unveiled Gotham City and Metropolis as two new places to which THY would "fly." A Turkish Airlines website, which will be rolled out in March, will offer visitors a chance of virtual tour of the two cities of the Batman and Superman universes.

For THY passengers, the sponsorship means travel kits with slippers, headphones and other in-flight items fitting to the film's theme, as well as new interior designs with figures from the film for flights to the United States. Passengers will also be eligible to attend the Los Angeles premiere of the film if they win a contest on their film knowledge.

Last but not least, THY will exhibit the Batmobile used in the film to Turkey, the first time the Caped Crusader's iconic vehicle will make it to a country where a city literally bearing the superhero's name is located.