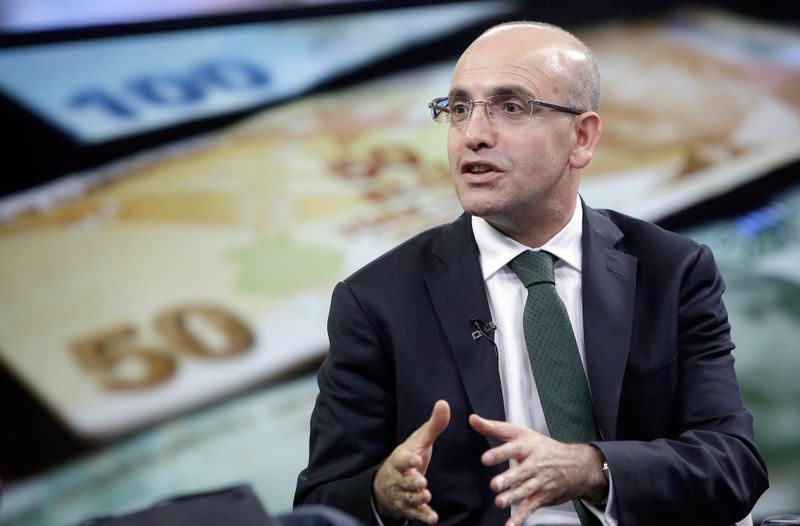 Despite the less than favorable liquidity conditions, Deputy Prime Minister Mehmet Şimşek emphasized the importance of the implementation of reforms to increase investor confidence

Mehmet Şimşek, deputy prime minister in charge of the economy, said Turkey has a strong story and the rapid realization of the promised reforms can lead to a significant flow of trust and funds into the country. During a televised interview, Şimşek answered questions about the World Economic Forum (WEF), recently held in Davos, Switzerland and Prime Minister Ahmet Davutoğlu's recent visit to London, as well as the details of other recent foreign visits of high state officials. Şimşek said Davutoğlu's visit to London mainly addressed the finance sector, adding that he met with the heads and ministers of states and corporate executives in Davos with the objective of telling "Turkey's Story."

"We will see the outputs of this story later," the minister said. Şimşek said Turkey faced internal and external uncertainties since mid-2013, adding that the Gezi Park protests and elections that came one after another forced many investors to postpone their investment plans. According to Şimşek's statements, nearly $15 billion flowed out of Turkey last year. The minister also touched on the real sector, saying that global direct investments in the sector remain strong. Although the sector could not achieve the investment figures of 2007, it attracted nearly $14 billion in direct investments last year. "This is a small figure when the sector's economic potential is considered. It should easily exceed between $40 billion and $50 billion," the minister added.

Şimşek said a scarce amount of capital enters developing countries as costs increase and the stories of developing countries are not as attractive as in the past when commodity exporters, who made a lot of money because of high commodity prices, contributed to improvement in budget and external economic balances. "This has become a thing of the past as commodity prices are tumbling," he added. The minister said that this situation applies to Brazil and Russia; however, Turkey and India constitute an exception in this regard since the direct impact of the fall in commodity prices on Turkey is positive as low oil prices lead to a decline in the country's current account deficit. However, it has indirect negative impacts on Turkey as it faces difficulty selling goods to many surrounding commodity exporting countries because of the declining revenues that accompany low oil prices. "We have difficulty undertaking projects in these countries and attracting investments from them," he said. Şimşek said foreign investors are informed about the invigoration of relations with the European Union, adding that Turkey's story is based on three main elements - a sector-specific transformation program, a roadmap of reforms and the EU accession process. Stressing that the EU membership process is a very important issue both for investors and Turkey, Şimşek said Turkey's story is "unbelievably" strong. According to the minister, promises such as a hike in the minimum wage and pensions, which are particular concerns for the public, have started to be fulfilled. He said many of the election promises have been fulfilled so far, and all of them will be fulfilled in the first quarter of the year. "These are the easy parts of the task as they are the regulations that will lead to a temporary rise in welfare and relieve certain parts of the society. The core of the issue is to conduct structural reforms that will upgrade Turkey permanently as we promised," he said.

Şimşek stressed that the Justice and Development Party (AK Party) took Turkey from the lower-middle income group to the upper-middle income group and emphasized that now the party's objective is to make the country one of the rich nations and upgrade it to the high-income group by conducting "new generation reforms." The minister said the trust of investors, who watch whether Turkey can achieve all this or not, cannot be won by making futile promises but through action.

Touching on the fact that Turkey was still in the grip of the atmosphere of the 2001 crisis when the AK Party came to power in 2002, Şimşek said real interest rates were around 35 percent - which urged investors to consider whether Turkey would go bankrupt at that time. He also said the realization of the promised reforms along with Turkey's strong story might bring about a significant flow of trust and funds into Turkey. "Turkey can differ from other developing countries with its story and become one of the high-income group countries in a period when developing countries are facing a very challenging conjuncture on a global scale," he said. "And this is possible with the rapid actualization of the promised reforms as investors expect."

Commenting on Turkey's ability to attract foreign direct investment in recent years, World Association of Investment Promotion Agencies (WAIPA) President Arda Ermut said in November 2015: "Since 2008, the amount of foreign direct investment has been getting smaller. It was once $2 trillion, but is now $1.2 trillion. A lot of investors are trying to get a share of the pie, while competing countries often change in line with the changing investment trends."

According to Ermut, Turkey's geographic region also bares importance in relation to investment conditions and criteria. "The higher potential a region has to offer investors, the more likely it is for any country in that region to be a recipient of investments," he said. "Turkey is one of the countries where investors can work with Far Eastern and American markets on the very same day. It is in a region that has a total market value of nearly $30 billion. As the country is within a three-hour flight [to many places], investors can reach close to 1.5 billion people."

It is obvious that Turkey's potential is very high. From around 1974 to 2003, average foreign direct investment to the country was around $1 billion per year, and around $15 billion in total. In the last 10 to 12 years, however, investments have been 10-times bigger, worth around $150 billion to $160 billion. Ermut explained: "The potential needs to be much higher. Turkey needs to attract more investors." Turkey is likely to attract more and more foreign direct investments as there will be no general elections for the next four years. "A new era in which Turkey will take off faster is about to begin with the leadership of President Erdoğan and Prime Minister Davutoğlu," Ermut said. Foreign investors' expectations also show that Turkey will be in a higher league of foreign direct investments.