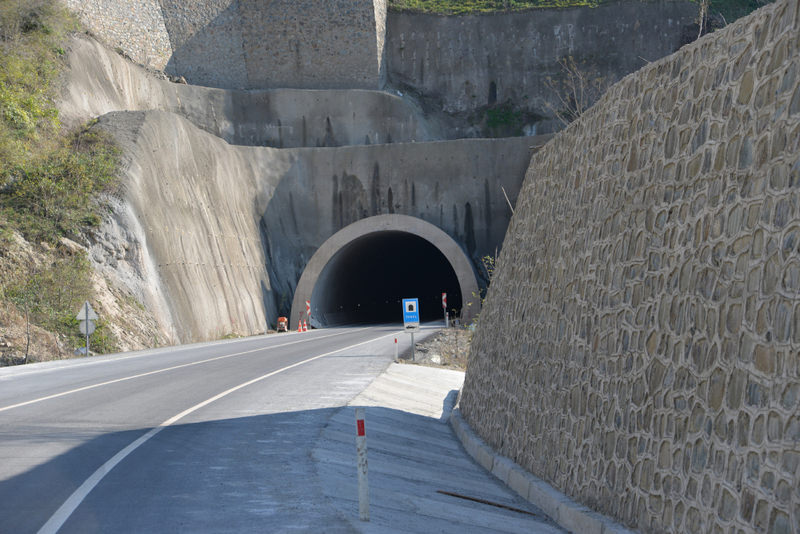 by daily sabah
Jan 26, 2016 12:00 am
The most difficult section of the Black Sea-Mediterranean highway, which crosses the mountains of the Black Sea via tunnels and viaducts, is nearing completion. While other projects of the Transportation, Maritime Affairs and Communications Ministry were realized within the last 13 years with investments exceeding TL 260 billion ($86.12 billion), including the Marmaray tunnel, the Ankara-Istanbul High Speed Train (YHT), the Ordu-Giresun Airport, the third Istanbul airport, the third Istanbul bridge, the Istanbul-İzmir highway, the Kars-Baku-Tbilisi railway and the Three-Story Grand Istanbul Tunnel.

Ordu Provincial Governor İrfan Balkanlıoğlu said this is the dream of the millennium, which has even been referenced in history, during the reign of Sultan Abdülaziz, when Abdülhamid II had the project drawn up by the French. "This is the shortest route between the Black Sea and the Mediterranean regions. From Ordu-Mesudiye, the route will continue to Koyulhisar and Sivas before reaching Osmaniye.

The 600-kilometer highway is expected to open in 2017. The most treacherous part of the road in terms of construction, which crosses the high, steep mountains of the Black Sea region via tunnels and viaducts, has almost been completed.

The 600 kilometer-road consists of three parts, with the two parts that run between the provinces of Ordu and Sivas already having been tendered. "The geographic conditions in this area lie at higher elevations; therefore, 22 tunnels extending more than 12 kilometers between Ordu and Mesudiye have been constructed. Furthermore, linking roads, access roads and viaducts have been built. The first stage is nearing completion and the second stage is set to be completed by next year, with the third stage being finalized in 2017. As a result, within two years, the route will be fully complete and opened to traffic," Balkanlıoğlu said.

The governor stressed that this road will be the shortest and quickest link between the Mediterranean region and the Black Sea region, adding that they are proud to have realized the dream of Sultan Abdülaziz and Abdülhamid II. The tunnels will be 30 kilometers long once the road is completed, and this highway will link several provinces - namely, the province of Ordu to Adana and the eastern Mediterranean province of Mesudiye to the southeastern provinces of Gaziantep and Şanlıurfa. "This way, the Black Sea region will be able to import local products from southeastern Turkey and transport its own local products as well. The project will be crowned with the addition of a port. These new transportation arteries will increase both trade and tourism," Balkanlıoğlu said.