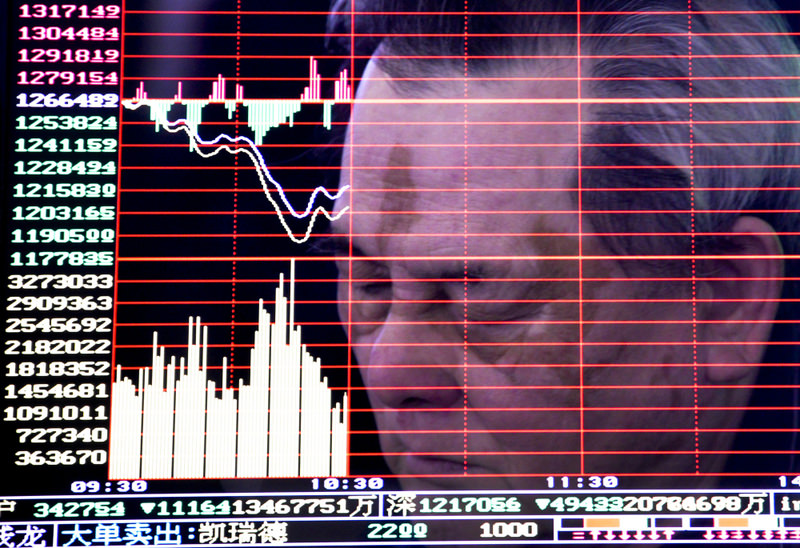 A man reflected on a screen displaying the stock index at a brokerage house in Handan in northern China's Hebei province.
by Feb 02, 2016 12:00 am

Markets got February off to a cautious start on Monday after a rocky January, as expectations of more cheap money from some of the world's top central banks were validated by fresh signs of weak global growth. European stocks extended losses before the U.S. open, after disappointing euro zone manufacturing data dovetailed with the fastest contraction in China's giant factory sector in over three years.

Wall Street was expected to open 0.3 to 0.4 percent lower, with all eyes on soon-to-be-released manufacturing data there and oil prices wobbling again after a rally over the last two weeks. January manufacturing surveys from Asia and Europe showed the new year began much as the old one ended - too much capacity chasing too little demand. Economists were expecting a similar picture from the U.S.

"My main question is will the U.S. economy be able to continue to grow just through the services sector when the manufacturing sector is having such a tough time," said Rabobank U.S. focused economist Philip Marey. "The Q4 GDP data was really weak ... Today we get the ISM manufacturing figures, which we are expecting to be soft and so that will leave us just waiting for Friday and the payrolls."

Friday's surprise move by Japan to cut interest rates to negative levels continued to provide support. Japanese government bond yields hit record lows, and bets the European Central Bank will cut its rates again next month also sent German five-year bond yields to all-time lows. In currency markets, the yen had steady at around 121.20 to the dollar and 131.40 to the euro. Friday's BoJ move set off its biggest one-day fall - roughly 2 percent- in over a year.

Elsewhere, oil-rich Canada's dollar fell half a percent against its U.S. counterpart after the weak economic data dragged oil prices down from overnight highs as high as $36 a barrel. Fellow oil exporter Norway's currency slipped 0.3 percent versus the euro.

"The broader macro focus is on the back of the BOJ and whether that's going to pull the other key central banks with it," said Bank of Tokyo-Mitsubishi UFJ strategist Derek Halpenny in London. "In that sense, the data over the week ahead is going to be pretty crucial, and that's where we are going to get our direction ... That's why we're sitting where we are with not too much price action."

MSCI's 46-country All World share index, which lost over 6 percent last month in its worst start to a year since the height of the global financial crisis in 2008, was slipping back towards the red before U.S. trading began. The earlier data showed China remaining the epicentre of the weakness. It also encompassed such bellwethers of high-tech trade such as South Korea and Taiwan in Asia. MSCI's broadest index of Asia-Pacific shares outside Japan edged up a modest 0.1 percent overnight, after losing 8 percent in January.

Japan, thanks to last week's BOJ easing, and Australia led regional markets with respective gains of 2 and 0.8 percent. Chinese stocks slipped 1.5 to 1.7 percent after the weak data there had strengthened calls for more stimulus. The Shanghai market dropped more than 10 percent last month and Monday's surveys showed growth slowing in both manufacturing and services. "In the short term, the surprise move by Japan will be a catalyst for global equities, but it only underlines the weakness of the global economy and we need to see some strong economics data for a sustainable rally," said Cliff Tan, head of global markets research with Bank of Tokyo-Mitsubishi UFJ.

Europe's weakness came despite the fiercest price cutting by firms in a year. Even British factories, which did enjoy a brighter start to the year than expected, saw companies cutting staff at the fastest rate in three years and export orders falling despite a weaker sterling.

Oil prices, the other major factor this year, remained a key focus. Brent dipped as afternoon European trading began, but at just $35 per barrel it was still up from Friday and more than 30 percent better than its 12-year low of almost $27 less than two weeks ago. It was under pressure again though as a senior OPEC source told a Saudi Arabian newspaper it was too early to talk about an emergency meeting of the Organization of the Petroleum Exporting Countries (OPEC) to stem the drop in prices. Crude jumped last week after Russian energy officials said Saudi Arabia had made proposals to manage output and was ready to talk. "We do not expect such a cut will occur unless global growth weakens sharply from current levels, which is not our economists' forecast," investment bank Goldman Sachs said in a report.