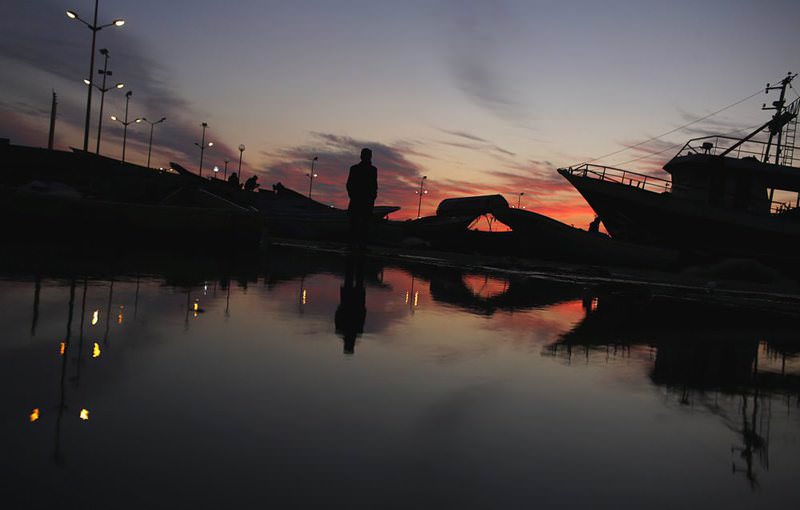 A Palestinian fisherman walks between fishing boats at sunset at the port to the west of Gaza City.
by Hazal Ateş Feb 05, 2016 12:00 am

As a part of the normalization process between Turkey and Israel, a Turkish business delegation visited Gaza with special permission. Infrastructure projects and an organized industry zone in Gaza appear as urgent investment needs

Diplomatic relations between Turkey and Israel, which were suspended for five years following the raid of the Mavi Marmara vessel by Israeli forces in 2010, are beginning to warm as civil diplomacy has stepped in to strive for the normalization of the relations. After Turkey's condition that the Israeli government apologize for the Mavi Marmara raid was met – one of Turkey's three conditions – steps are being taken to fulfill the second condition for "compensation for victims." Now, the Israeli government has opened the doors of the Gaza Strip to Turkish businessmen for the first time since the Mavi Marmara incident, signaling an incremental intent to allow Turkish business access to the area.

A large group of Turkish businessmen, presided by the Turkish Union of Chambers and Commodity Exchanges, visited Gaza with special permission and the embargo against Turkish goods might be lifted soon.

Discussions to assign ambassadors continue, while the flight restrictions have been lifted, and recent visits of top-level Turkish officials to Ramallah and Gaza indicate that the normalization process is improving.

Turkish firms will have priority regarding the construction of Gaza, which was blockaded by Israel for the past ten years, which means it will be possible to establish a trade zone in Palestine. The infrastructure construction for the organized industrial zone in the region of Cenin, by the Turkish Union of Chambers and Commodity Exchanges (TOBB) and Turkish Economic Political Research Foundation (TEPAV), have been revived as the problem of expropriating prices - ongoing for the past ten years - have been resolved.

TEPAV's experts noted that a price of 10 million euros has been paid for expropriation and after the issuance of the master plan, now the project for the organized industrial zone is at the final approval stage. The tender documents will be issued in September; a fence will be erected around the approximately 900,000-square-meter area within which an administrative building will be constructed. Utilities such as electricity and water will be received from Israel, and once the construction plans are completed, an international promotion tour will be organized.

In the first stage, 5,000 people will be employed and in total, 10,000 people will be employed in this area close to the port. The Israeli government will facilitate the entry and exit of this industrial zone, in which Israeli, Palestinian and Turkish investors can operate. Turkey will also provide professional trainings in this region to Palestinians.

TOBB President Rifat Hisarcıklıoğlu and the TEPAV committee visited Ramallah and Gaza and informed the related parties that they are willing to undertake the construction of the port and urban transformation in Gaza - for which donor countries have promised an investment of $5 billion.

Hisarcıklıoğlu noted that the Gaza visit was a sign that the relations were improving and that there is positive sentiments towards Turks. "We are willing to invest in Gaza with our world-renowned firms. We didn't encounter any obstacles while entering the city, and in order for the projects to be implemented, Israel, Ramallah and Gaza should be willing," said Hisarcıklıoğlu.

According to TEPAV, $3.5 billion of the international fund ($5 billion in total) has been reserved for Gaza, and the remaining $1.5 billion for Ramallah. Turkish firms may be assuming projects totaling $1 billion in these areas and since a strategic renovation plan is currently being issued for Gaza, which is built on 360 square kilometers and has more than a population of 2 million, Turkish firms are willing to take on projects.

With the special permission of the Israeli government, various meetings included the Vice President of Gaza's Hamas Political Bureau Ismail Haniyeh as well as Palestinian ministers. The Palestinian deputy Foreign Affairs minister also attended the meeting with Haniyeh. The ministers and other state officials have noted that they will be willing to support Turkey to take a leading role in the reconstruction of Gaza. "Our relations with Israel are different. Turkey has a different vision and politics. We are ready to provide support for the implementation of projects offered for Gaza," said the authorities.

A meeting with the Palestinian Economy Minister Abeer Odeh was held, and the Palestinian Ministers thanked the Turkish President Recep Tayyip Erdoğan for all his support, adding that they are willing to cooperate in these projects and that they might be visiting Turkey in the first week of May.

The opinion of the residents of Gaza will shape the projects concerning urban transformation. "What do you want your house to be like?" will be the main question, and meetings with Israeli investors will be held in this regard, along with an international design competition.