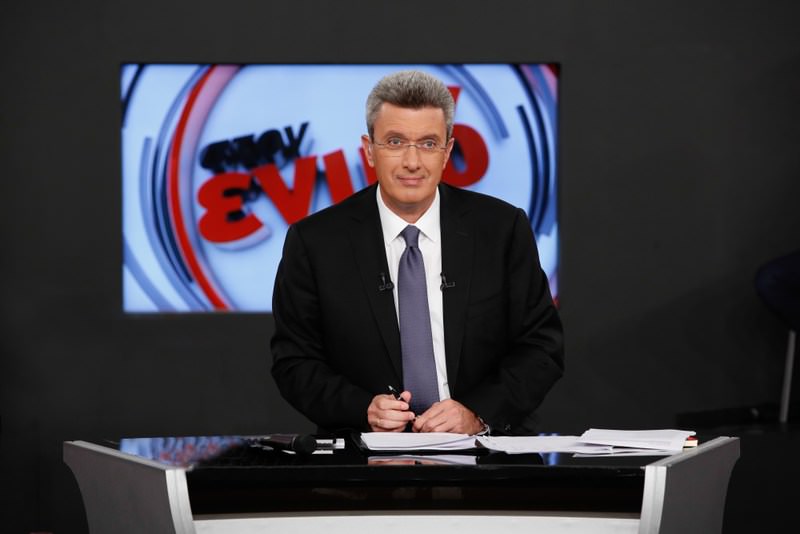 by Kerim Ülker Feb 07, 2016 12:00 am
After Acun Ilıcalı, owner of Turkish TV channel TV8, initiated steps to establish a television channel in Greece, the Greek media mogul and journalist Nikos Chatzinikolaou announced that he intends to enter the Turkish media sector. Speaking to Athens-based Greek radio station Real FM, Chatzinikolaou said that while he already owns a newspaper, radio station and websites, his venture into TV would not begin in Greece, but in Turkey. While this initiative by Chatzinikolaou might be seen as a reply to Ilıcalı, he denies any connection and said that he wants to run the new business independently. "This is a different attempt. Turkey has a population of 80 million and a strong, growing economy, which makes it an attractive market," said Chatzinikolaou, adding that his media group has started meeting with the Turkish Embassy in Greece, which supported this idea and advised Chatzinikolaou on the process. "We have started the procedure," announced Chatzinikolaou. A crisis emerged after Ilıcalı announced that he wanted to buy a TV broadcasting license in Greece and that he had discussed the issue with Greek Prime Minister Alexis Tsipras. Nikos Dendias, a deputy from the main Greek opposition party - the New Democracy Party - asked the Greek prime minister how he could allow a Greek television broadcast license to be issued to a foreigner. The Panhellenic Socialist Movement (PASOK) made a similar announcement, and Andreas Loverdos, a PASOK deputy, noted that no one should be surprised by Tsipras' reaction. "He has to reveal everything. We cannot grant broadcasting licenses to a neighboring country with which we face problems almost on a daily basis," said Loverdos. Yiannis Kallianos, a deputy from the Center Union Party, also warned the government against any attempts to close a Greek channel to provide a channel for a Turk. The Greek government confirmed that Tsipras had discussed the issue while watching a football game between Turkey and Greece during his visit to Istanbul in November, and Ilıcalı had informed Tsipras of his interest in buying a license and that he also had found Greek partners. Tsipras also announced that the tender for the licenses would be completely transparent. Ilıcalı said, "We have two alternatives. We will either buy a channel in Greece or a radio frequency. I have discussed the issue with the Greek prime minister, and he is excited about this prospect and will be supportive. We aim to take the first step in October." Ilıcalı said that the programs will be similar to the ones currently broadcast on his Turkish TV channel TV8 and that they have purchased the Greek rights for "The Voice" ("O Ses Türkiye" in Turkish), a singing competition program and they are also planning to organize a "Survivor" show in Greece.