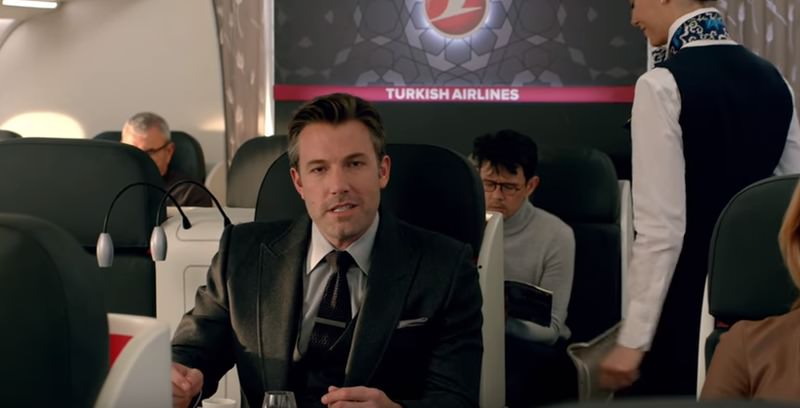 The commercials starring Ben Affleck and Jesse Eisenberg who play Batman and Lex Luthor, respectively, along with a specially-themed Boeing 777 aircraft aired ahead of the Super Bowl on Sunday.

In the commercials, the stars appeared as their characters from the upcoming movie "Batman v. Superman: Dawn of Justice" to promote their hometowns of Gotham City and Metropolis as the airline's newest destinations.

"Thanks to a significant grant from my company, Wayne Enterprises, Gotham City is being restored to its former glory," Affleck's Wayne explains as footage shows the city's opera house and nightlife scene in "the new Bowery."

İlker Aycı, Turkish Airlines' Board chairman, said: "We're extremely excited to partner with Warner Bros. Pictures on the most anticipated movie of the year. The excitement around "Batman v Superman: Dawn of Justice" will enable Turkish Airlines to showcase our global network and unrivaled hospitality to a legion of moviegoers across the world."

Gene Garlock, Warner Bros. Pictures' Executive Vice President expressed the company's pleasure in partnering with Turkish Airlines to take the film into the skies and to fans everywhere.

Garlock said: "What made Turkish Airlines such an inspiring partner was their aspiration to dream up something more than just a promotional program, an experience that would be as original and epic as the film."
Last Update: Feb 08, 2016 12:37 pm
RELATED TOPICS