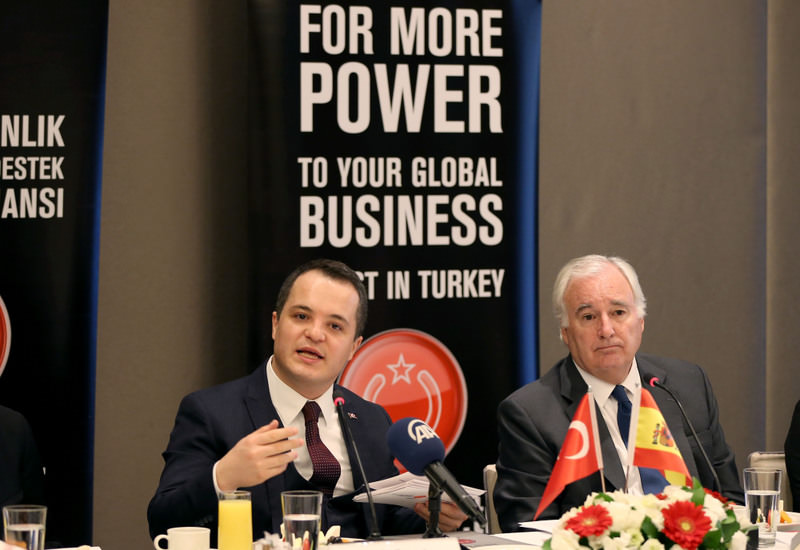 Director-General Arda Ermut of the Investment Support and Promotion Agency of Turkey (L) and Spanish ambassador to Ankara, Rafael Mendivil (R) came together to discuss new policies to be applied to international investments in Turkey.
by Daily Sabah with AA Feb 09, 2016 12:00 am

In a meeting chaired by President Arda Ermut of the Investment Support and Promotion Agency of Turkey and Spanish Ambassador to Ankara Rafael Mendivil Peydro, new policies were revealed which will be applied to international investments in Turkey as well as measures to increase international investment activity in the country, citing the Action Plan of the 64th government.

In his opening speech, Ermut underlined that the meeting aimed to share updated information regarding the current state of the Turkish economy as well as current activities of the Investment Support and Promotion Agency of Turkey (ISPAT), along with support from senior executives of 25 Spanish companies that have investments in Turkey.

Ermut said the economic reform schedule of the 64th government's Action Plan highlights regulations that will facilitate new investments and improve the investment environment in accordance with the expectations of the business world. These regulations, which can be summarized as structural reforms, cover a wide range of areas, such as ensuring social justice, eliminating ineffectiveness in the bureaucracy, activating the labor market, making public expenditures more rational, developing energy efficiency and improving the investment environment.

According to Ermut, 610 Spain-capitalized companies have operations in Turkey to-date - with their total investments in Turkey reaching $10 billion over the past 10 years. The president stated that investors generally focus on finance, insurance, automotive supply and energy, adding that Spanish firms are expected to play a significant part in Turkey's infrastructure projects; particularly in the fields of renewable energy and high-speed trains, during the upcoming period. He underlined that the business circles of the two countries should know each other better.

Peydro supported Ermut's remarks, stating that Turkey and Spain are "absolute partners" and that it is more important than ever for both countries to act in unison for the sake of shared interests, due to the current crises in the Middle East and ongoing tensions between Turkey and Russia.

Peydro also said that Spain is ready to overcome the economic crisis and take major steps toward investments abroad, noting that "Currently, there are 610 Spanish companies in Turkey which represent Spain's investments. But, this figure can be increased further."

Stressing that the government is taking efficient steps regarding direct investments on all levels, Peydro said he believes that Turkey will take more concrete steps regarding bureaucratic transactions and customs practices in the upcoming period.
Last Update: Feb 09, 2016 11:51 am
RELATED TOPICS