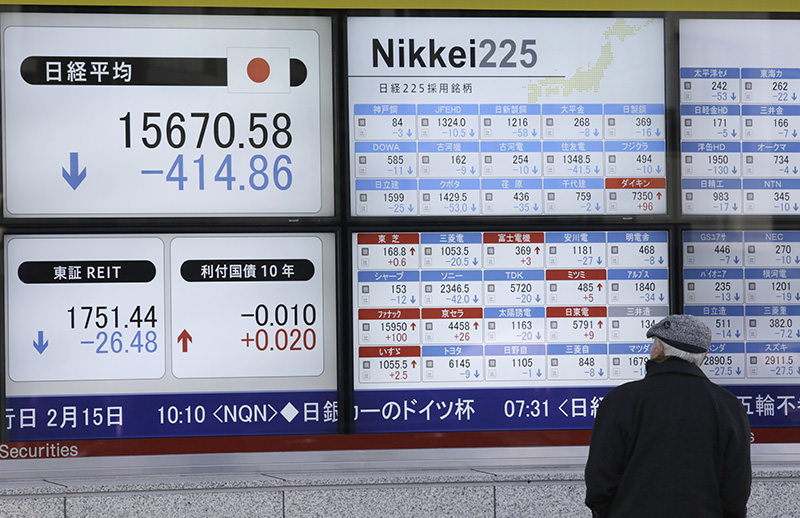 by Feb 10, 2016 12:00 am
Asian stocks fell on Wednesday on growing concerns about the health of the world's banks, particularly in Europe, pushing investors into safer assets such as the yen, which stood near a 15-month high versus the dollar.

Spreadbetters expected the pessimism to carry over into Europe, forecasting a slightly lower open for Britain's FTSE , Germany's DAX and France's CAC.

Japan's Nikkei, which tumbled more than 5 percent Tuesday, suffered another bruising session and slid to a 16-month low.

The Nikkei was last down 4 percent with falling bank shares and a stronger yen continuing to take a toll on sentiment.

The adoption of negative interest rates by the Bank of Japan has provided no support, and the index has dropped more than 10 percent since the central bank's surprise easing on Jan. 29.

Australian stocks touched a 2-1/2-year trough and MSCI's broadest index of Asia-Pacific shares outside Japan fell 0.4 percent. The Chinese markets are closed this week for the Lunar New Year holidays.

Equity markets were struck early in the week by worries about the health of the euro zone banking sector, with very accommodative monetary policy seen crimping bank profits and their ability to repay debt.

Trouble for equities has meant a boon for sovereign debt, with the Japanese government bond 10-year yield dropping into the negative for the first time on Tuesday before pulling back to 0.010 percent.

The U.S. Treasury benchmark yield stood near a one-year trough and the 10-year German bund yield was at its lowest in 10 months.

The yen and Swiss franc, often sought in times of financial market turmoil, have also received strong boosts this week.

"Concerns about European banks are contributing to the risk off mood in markets. In addition, U.S. data this month has been weak and Fed officials appear to be toning down on rate hikes," said Shinichiro Kadota, chief FX strategist at Barclays in Japan.

After a tumultuous start to the week, markets looked to Federal Reserve Chair Janet Yellen's congressional testimony later in the session for fresh cues on the policy outlook, which may provide some relief for markets.

While Yellen is expected to defend the Fed's first rate hike in a decade last year and likely insist that further increases remain on track, any signs of a departure from such a stance in the wake of global growth concerns could provide risk assets with a breather.

In commodities, crude oil prices trimmed some of their sharp losses suffered overnight. U.S. crude was up 2.1 percent at $28.53 a barrel. Crude sank nearly 6 percent on Tuesday after weak demand forecasts from the U.S. government and a rout in equities pressured prices.