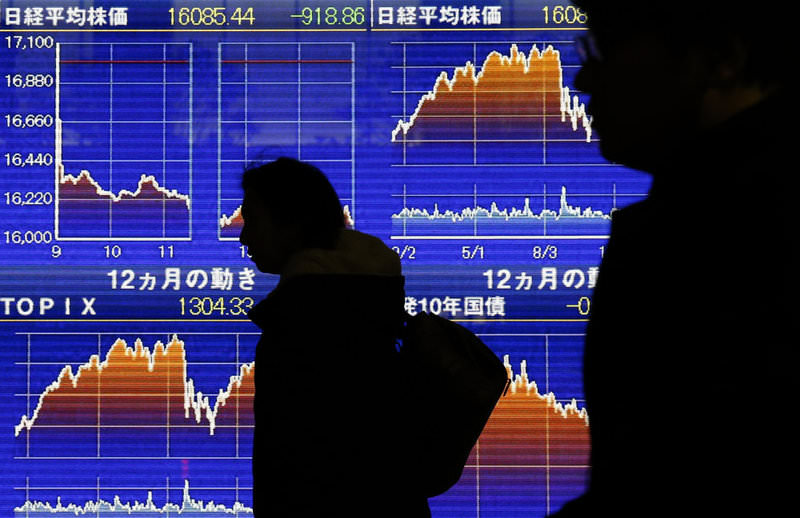 Pedestrians walk past an electronic board showing the graphs of the recent fluctuations of Japan's Nikkei average outside a brokerage firm in Tokyo, Japan, on Feb. 9.
by Feb 10, 2016 12:00 am

Turmoil in Asian markets arising from long-term Japanese bonds falling below zero and European shares under pressure have led investors to safe havens such as gold, while oil prices fall further

A drop in bank shares kept European shares under pressure on Tuesday, after losses in Asian markets sent investors scurrying for safe havens. Turmoil in Asia set the tone for the session, as yields on longer-term Japanese bonds fell below zero for the first time, the yen surged to a 15-month peak and gold reached its highest since June.

After a choppy morning, the pan-European FTSEurofirst 300 turned lower, dropping 1.8 percent. It touched its lowest levels since October 2014 as it fell for a seventh straight day. The STOXX Europe 600 bank sub-index fell 3.4 percent, leaving it down around 9 percent so far this week. Shares in several Italian banks were suspended from trading after dropping sharply. The euro zone bank index was down for its seventh straight week, set for its longest weekly losing streak since 1998. Other growth-sensitive sectors, such as basic resources, also came under pressure, as copper fell 2 percent. In all, world stocks fell 0.9 percent, and S&P 500 e-mini futures were also down 0.9 percent.

Many investors believed that signs of stress in the market for credit default swaps pointed to further declines ahead. "There is a high probability of a further correction in equity prices, led by banking and energy stocks. There could be a wave of defaults in the energy sector and that will damage the balance sheet of the banking sector," said Lorne Baring, managing director of B Capital Wealth Management. Slowing global growth was clouding the outlook further, he added.

"We are advising our investors to drastically reduce risk and build protection."

Deutsche Bank turned negative and was down 1.2 percent, extending Monday's 9.5 percent slide. Late Monday, the German bank said it has "sufficient" reserves to make payments due this year on AT1 securities, after concern had mounted about its ability to maintain bond payments.

Strategists at Goldman Sachs said banks had enough liquidity and that recent capital hikes should reduce the risk of a financial crisis re-run.

Asian shares also slid on Tuesday. Japanese Finance Minister Taro Aso warned the yen's rise was "rough", something of an understatement as the Nikkei nosedived 5.4 percent.

MSCI's broadest index of Asia-Pacific shares outside Japan fell 1.2 percent. Australian shares hit a 2 1/2-year closing low and would have been lower if not for holidays in many centres.

Traders said that the recent market turmoil raised the stakes for U.S. Federal Reserve Chair Janet Yellen when she gives her semi-annual testimony before Congress this week. "She needs to come across as optimistic without being too hawkish and cautious without being negative," said Jo Masters, a senior economist at ANZ. "Hawkishness or dovishness could easily exacerbate the current sell-off, tightening financial conditions further."

U.S. crude oil fell back below $30 a barrel, having risen over 2 percent in earlier trade. With copper down, gold benefited from the risk-off sentiment and reached a seven-month high.

The Bank of Japan's recent shift to negative rates has raised concern that exotic monetary policy is reaching the point of diminishing returns. But talk about a possible recession in the United States has also led to speculation the Federal

Reserve will have to slow or suspend plans to normalise rates.

"Investors continue to question the outlook for the world's largest economy, the US. We are with the consensus in seeing no imminent threat of a US recession," David Stubbs, Global Market Strategist, JP Morgan Asset Management, said in a note.

Diminishing expectation U.S. rates will rise have pulled 10-year Treasury yields to their lowest since early 2015 and weakened the U.S. dollar, which touched a six-week trough against the Swiss franc. The euro hit a two-week low against the franc.

Against a basket of currencies, the dollar was flat at 96.525.

While the euro was edged up against the dollar, bets on volatility ahead for euro-dollar exchange rates surged to a two-month high of 11 percent, as traders bet more on the dollar. That flipped most derivatives pricing in favour of a weaker euro over the next few months.

By the far the biggest mover was the yen, long considered a safe haven given Japan's position as the world's top creditor nation. The dollar dived as low as 114.22 yen from above 121 a week ago. The euro fell as much as one percent to 128.24 yen.

Southern European bond yields pulled back from multi-month highs on Tuesday, showing some signs of stabilization a day after concerns about global growth and the health of Europe's banks triggered heavy selling.

Such concerns have also seen one market measure of long-term euro zone inflation expectations fall to a record low.