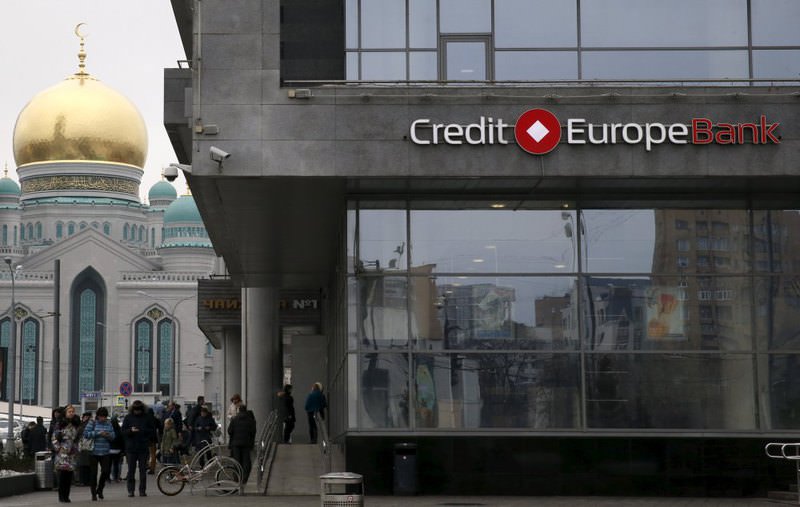 People walk near a branch of the Credit Europe Bank, with a mosque seen in the background, in Moscow, Russia.
by Daily Sabah Feb 12, 2016 12:00 am

After rumors that Fiba Holding will sell off branches of its Credit European Bank in Russia due to tensions between Turkey and Russia, the head of Fiba Holding Özyeğin refuted all claims regarding the sale

Fiba Holding Board Member Murat Özyeğin responded to rumors that the holding will sell its shares of Credit Europe Bank, which operates in Russia, saying that there is no sale process now. Sources told Reuters that there were preparations to sell Russian medium-scale Credit Europe Bank, which is owned by Turkey's Fiba Group. Speaking at an ordinary general meeting at the Turkish Industrialists' and Businessmen's Association (TÜSİAD), Özyeğin said Russia did not pressure the group to sell the bank. Claims about the bank's exit from the Russian market came after economic relations between Turkey and Russia were strained due to Turkey downing a Russian fighter jet that violated its airspace in November 2015. "We have no problems with Russia, but we can see proposals anytime," Özyeğin said, adding that the group did not authorize Morgan Stanley to sell its operations - even though newspapers had previously claimed that prominent Turkish banker Hüsnü Özyeğin announced the sale of Credit Europe Bank.

Credit Europe is owned by the Credit Europe Bank of the Netherlands - of whose share certificates, 99.99 percent belong to Özyeğin. According to information provided by Dutch bankers, local authorities have started imposing certain conditions on companies that are based in the Netherlands and have assets in Russia. The bankers indicated that strict protocols are followed, some of which could be deemed exploitative, as authorities pressure such companies to either sell their assets to the Kremlin or provide exhaustive reports detailing how their funds within Russia are being used.

Credit Bank Europe in Russia has 115 branches and as of Jan. 1, 2016, 4.5 million private banking customers, 1,600 corporate bankers and more than 14,000 customers from Small- and Medium-Sized Enterprises (SMEs).

Credit Europe Bank has 150 branches in the Netherlands alone and does business in eleven countries, which exceeds 8.5 billion euros. Russian-imposed difficulties are not new to Dutch financiers, already seasoned to the strict and extremely tight conditions for businesses operating in Russia. Bankers suggest that if it were not for the recent imposing of these conditions, Hüsnü Özyeğin would not have put his bank on the market, as it is already engaged in business in various sectors with the Kremlin.

According to news reports published by the Russian daily Kommersant this week, all the branches of Credit Europe Bank in Russia belonging to Turkish Fiba Holding will be sold. Multiple sources have indicated that Morgan Stanley, an American multinational financial services corporation, will oversee the sale of Credit Europe Bank's Russian branches.

Since most of the shares of the bank are owned by Fiba Holding, the sale is likely the direct outcome of deteriorated relations between Turkey and Russia following the downing of the Russian military jet in November 2015.
RELATED TOPICS