Toyota to invest more than 350M euros in Turkey 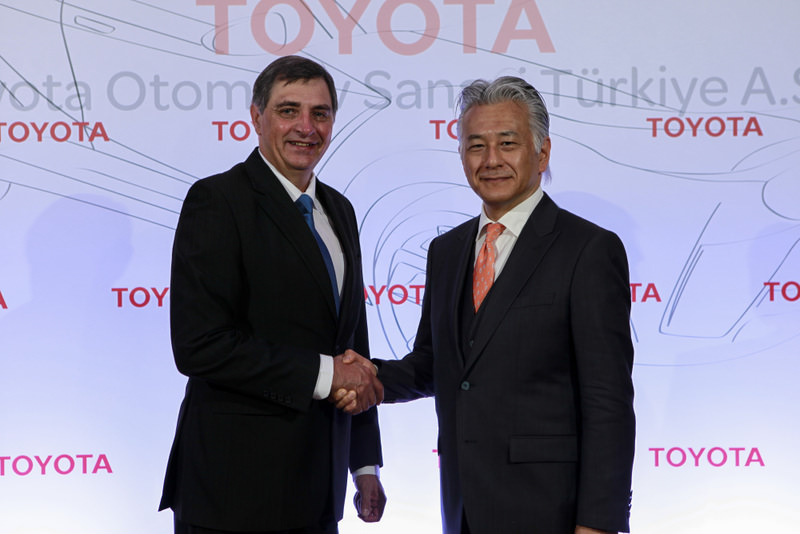 Toyota has decided to invest more than 350 million euros in its Turkish subsidiary's factory in Sakarya with the aim of increasing its yearly capacity by 90 percent, creating more than 1,000 jobs

Japanese automobile manufacturer Toyota's Turkish subsidiary, Toyota Otomotiv, will invest more than 350 million euros in its factory in Sakarya in order to begin the production of a new model of its C-HR concept vehicle toward the end of the year. With the new investment, the company, which currently produces Corolla and Verso models, will increase its annual production capacity by nearly 90 percent, and will offer more than 1,000 additional jobs. Speaking at a press conference where the new investment was announced, Toyota Motor Europe CEO Johan van Zyl said the new model will be the first hybrid motor vehicle to be produced in Turkey. "This shows the significance of Toyota Turkey for Toyota's Europe strategy," he added. Expressing his gratitude to the government for its support, van Zyl said the company's production capacity will soar from 150,000 cars per year to 280,000 cars per year. "We aim to contribute to the development of the domestic automotive industry," he said. van Zyl added that the new model will be exported to 53 countries, most of which are European countries, continuing that what makes Toyota different from Europe is its emphasis on hybrid vehicles and the environment.

Toyota authorities said the name of the new model will be announced during the Geneva Motor Show in March, and more than 80 percent of new-model cars will be exported. They did not share information about the car's engine options, apart from saying that it will be a hybrid one in the compact crossover class. Toyota Turkey CEO Hiroshi Kato said the annual production capacity at the Sakarya facilities will be increased from last year's 115,000 cars per year to 140,000 cars per year this year, including 44,00 new-model cars, the production of which will start toward the end of the year. According to Kato, the company plans to produce 67,000 Corollas and 30,000 Versos this year. He did not mention specific details about the numbers and countries to which the cars will be exported. Hiroshi said Toyota exports 80 percent of the cars that it produces in Turkey and aims to increase this figure to 90 percent in 2017 when the new model is produced throughout the year. Toyota Turkey Marketing CEO Ali Haydar Bozkurt said the company sold more than 50,000 cars to domestic buyers last year, adding that he estimates between 15,000 and 20,000 new-model cars will be sold in 2017.

Moreover, Mercedes-Benz Türk announced on Wednesday that it would invest 113 million euros in its truck plant in the central province of Aksaray between 2016 and 2018, doubling its capacity. The capacity increase will bring the number of workers in the plant from 1,800 to 3,000.

The groundbreaking ceremony for the new investment was held on Wednesday with Science, Industry and Technology Minister Fikri Işık in attendance. Stressing that Turkey ranks first in bus and light commercial vehicle production and second in truck production in Europe, Işık said Turkey has important, untapped potential in the automotive sector in general.

Highlighting that the German auto giant spends $6 billion worldwide on research and development (R&D) activities and has been operating an R&D center in Turkey since 2009, Işık said Turkey aims to become an attraction point not only for production, but also for research, development and design.

The company's financing and controlling director, Stefan Baasner, said they aim to increase their exports with the new investment. Baasner added that Mercedes-Benz has been Turkey's market leader in heavy trucks for the last 14 years.

Mercedes-Benz operates two plants in Turkey. In addition to the Aksaray plant, which was founded in 1986, the company has been operating a bus plant in Istanbul since 1967. In 2015, 19,688 trucks were produced at the Aksaray plant.
RELATED TOPICS