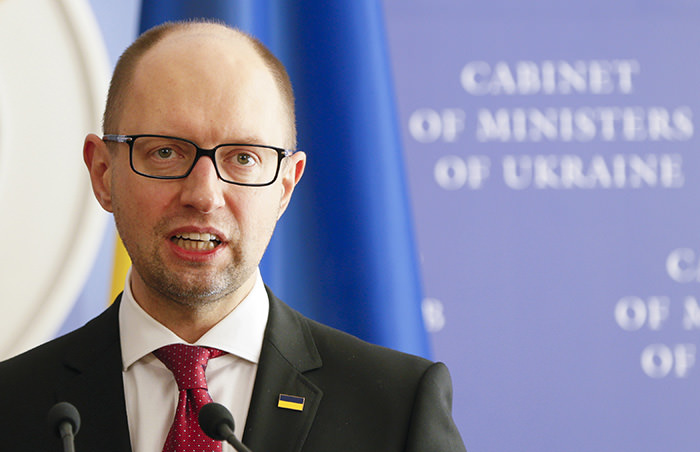 Ukraine's Prime Minister Arseny Yatseniuk speaks during a news conference in Kiev, Ukraine, February 1, 2016 (Reuters Photo)
by Feb 15, 2016 12:00 am
Ukraine yesterday banned the transit of Russian trucks across its territory in a tit-for-tat response to an escalating trade war between the feuding states.

The Ukrainian government said its decision was taken because Russia had "violated the World Trade Organization's rules and procedures and bilateral intergovernmental agreements... by unilaterally halting the movement of Ukrainian trucks." It added that the measure would stay in effect until Ukraine "receives an explanation from Russia."

Russia's transport ministry said on Sunday it was imposing the ban "in response to the suspension of passage" of its own trucks across Ukraine.

Nationalist groups in the west of war-scarred Ukraine had spent days trying to keep Russian trucks from crossing into the rest of Europe in protest over the Kremlin's alleged support for pro-Russian separatists in the country's east. But no formal decision to stop Russian traffic had been taken by the Ukrainian government itself until Monday.

Russia's transport ministry defended its ban by accusing Kiev of "taking no action to stop these illegal acts" by Ukraine's far-right groups.

The counter-allegations underscore how badly Moscow's relations with Kiev have been damaged since Ukraine's pro-Russian leader was ousted in February 2014, followed by the Kremlin's annexation of its Crimea peninsula the following month.

A pro-Russian eastern revolt that broke out in March 2014, and which Moscow denies backing, has left more than 9,000 people dead - most of them civilians - and has plunged the Kremlin's relations with the West to a post-Cold War low.

Ukrainian Prime Minister Arseniy Yatsenyuk said he was conducting negotiations with Kiev's European Union partners in an effort to resolve the dispute. But it adds yet another headache for EU leaders who had spent a year unsuccessfully trying to broker an end to the Ukrainian war.

The West has imposed tough economic sanctions on Russia over its purported involvement in the conflict that Moscow has countered by banning imports of food from nations allied with the new Ukrainian leadership. Several EU state hit especially hard by Russia's trade embargo have been hoping to ease some of the bloc's punitive measures against Moscow when they come up for a review in July.
Last Update: Feb 15, 2016 6:06 pm
RELATED TOPICS