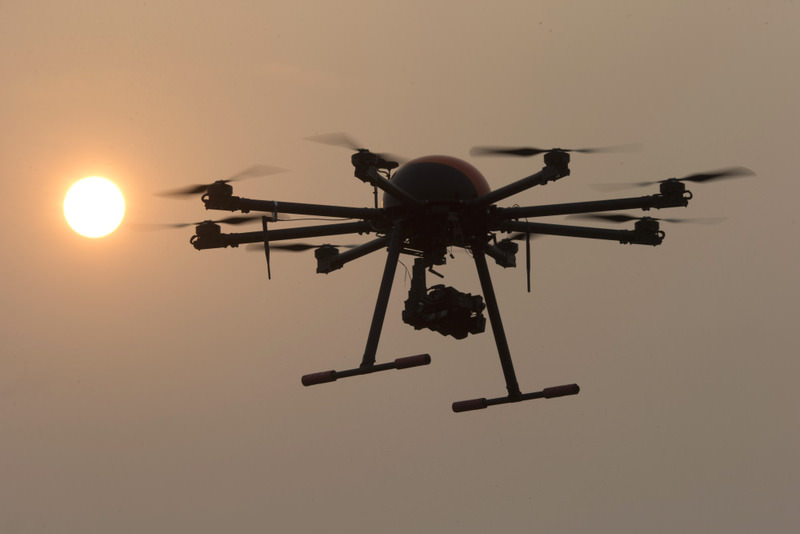 A drone hovers with the sun in the background near a school run by TT Aviation Technology in Beijing.
by Feb 16, 2016 12:00 am

As the use of drones expands from military to commercial use, experts fear that these radio-controlled flying devices, if not properly regulated, could one day collide with a commercial aircraft

Civilian drones are increasingly becoming a "real and growing threat" to the safety of commercial aviation, the industry group International Air Transport Association (IATA) warned on Monday, calling for regulations to be put in place before any serious accidents occur.Tony Tyler, director-general of the IATA, said the threat posed by unmanned aerial vehicles is still evolving as people are only starting to discover the many potential non-military applications of the technology.

"I am as excited as you are about the prospect of having pizza delivered by a drone," Tyler told an aviation conference in Singapore on the eve of the Singapore Airshow. "They are here to stay. But we cannot allow them to be a hindrance or safety threat to commercial aviation," he told industry executives and air transport officials. "We need a sensible approach to regulation and a pragmatic method of enforcement for those who disregard rules and regulations and put others in danger," he added.

As the use of drones expand from the military to commercial use and even recreational purposes, experts fear that these radio-controlled flying devices, if not regulated, could one day collide with a commercial aircraft with dire consequences.

"The issue is real. We have plenty of pilot reports of drones where they were not expected, particularly at low altitudes around airports... There is no denying that there is a real and growing threat to the safety of civilian aircraft (coming from drones)," said Tyler.

Rob Eagles, an IATA expert on drones, said the industry group did not have figures on the number of drones in operation worldwide but anecdotal evidence showed they were mushrooming.

When the US Federal Aviation Administration ordered a registration of drones weighing up to 55 pounds (25 kilograms) last year, 300,000 were registered within just the first month in December, he said. While 55-pound drones are considered small, "this just gives you an indicator of the number of vehicles," Eagles told AFP at the conference. "There's going to be an increase in vehicles across the whole scope and range from small to medium size to the larger unmanned vehicles."

IATA's primary concern are drones flying at low altitudes near airports, which could threaten planes that are taking off or landing, Eagles said. Aviation regulators also want to make sure that the radio spectrum used to control the drones does not interfere with air traffic control systems.

The Center for the Study of Drones at New York-based Bard College said in a report that it had recorded 921 incidents involving drones and manned aircraft in US airspace between December 2013 and September 2015.

Thirty-six percent of these were considered as "close encounters."

"We found that over 90 percent of all incidents occurred above 400 feet, the maximum altitude at which drones are allowed to fly," said the report, posted on the center's website. In 28 of the incidents, the commercial pilot had to maneuver to avoid collision with a drone.

Of the 191 states within the International Civil Aviation Organization (ICAO), 63 so far have regulations already in place for drones, Eagles said. Nine states have pending regulations, while five have banned their use, he said.

"But there's no consistency across the regulations," he said, adding that the IATA aims to help harmonize global rules.

"There is an urgency associated with it because it's such a fast-moving industry," said Eagles.
RELATED TOPICS