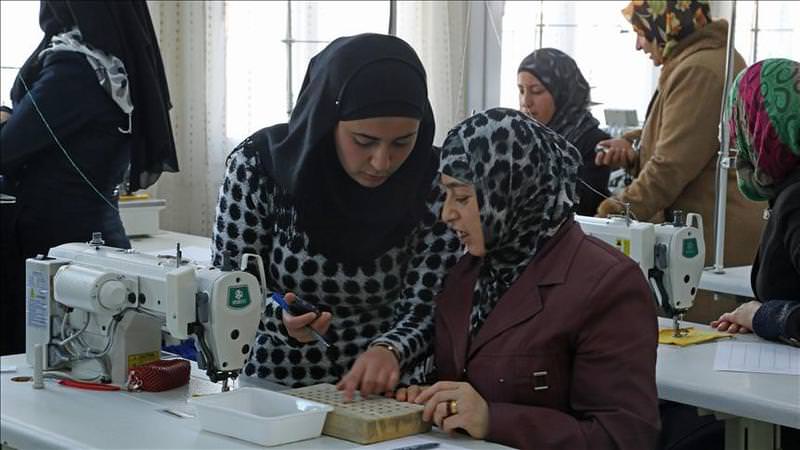 Eighty women at the Oncupinar refugee camp in Kilis province near the Syrian border have enrolled in a machine knitting course. (AA Photo)
by Anadolu Agency Feb 16, 2016 12:00 am
A group of Syrian refugees hope to join the ranks of Turkey's employed soon thanks to vocational training and a recent change in Turkish law.

Eighty women at the Öncüpınar refugee camp in Kilis province near the Syrian border have enrolled in a machine knitting course organized by the UN and Turkey's Disaster and Emergency Management Authority.

Last month, Turkey granted refugees the right to work and the women hope to take advantage of this by joining the country's large textile industry.

Former kindergarden teacher Mutia Tattu, 33, from Idlib in in northwest Syria, has been living at Öncüpınar for four years.

"This course is my chance to get a job outside the camp," she told Anadolu Agency. "My life is now filled with my new target and hobby."

Before the conflict broke out five years ago, Fikri Sahyuni, 45, earned money through knitting on an old fashioned machine. "Now, I can upgrade my skills by learning on a new model machine and I can do better," she said.

"We have started the UN vocational machine knitting course with 80 women in Kilis," he said. "Participants were subjected to elimination - we tested them for color blindness, their sewing skills and attention span."

More than 100 applied to the course, financed by the Japanese government, at Oncupinar.

"The training program was designed to build skills in order to equip them with vocational skills for employment," Tuygun said.

Kilis-based textile firm Elyaf Triko has extended the possibility of giving jobs to some of those who pass the course, offering a way out of dependency for the women.