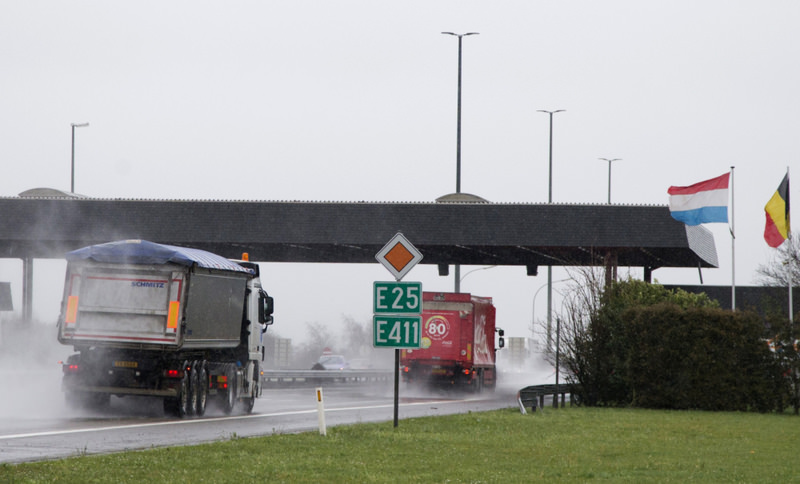 Trucks pass through an open border control point between Belgium and Luxembourg.
by Associated Press Feb 17, 2016 12:00 am

As the EU considers re-introducing border controls between some of its 26 Schengen zone countries to deal with the migrant crisis, a study forecasts an 8 percent reduction in economic activity in the zone over the next decade

The Hungarian city of Sopron, population 50,000, boasts an abundance of beauty shops and 200 dentists one for every 250 residents. Most businesses don't target the locals, though; they're looking at the Austrians streaming across the nearby border to shop for bargains.

Such cross-border traffic could soon suffer, as the European Union considers re-introducing border controls for up to two years between some of the 26 nations in the Schengen passport-free area to deal with the migrant crisis. If the border controls return, "we might as well close shop," says seamstress Eva Grubics. "Austrians make up 80 percent of our business."

In Luxembourg, a thousand kilometers (600 miles) to the west, Schengen Mayor Ben Homan also has reason to hope the free-border agreement will remain in place. Its signing there in 1985 heralded a new era of passport-free travel, speedy transport and expanded commerce over much of a continent that had before been a patchwork of borders against hostile neighbors, competitive business and competing ideological blocs.

With locals' vineyards situated both in Germany and France just a few minutes' walk away, residents of his "little town of wine-makers" are more conscious than most of the agreement's advantages, says Homan.

Since the signing, thousands of businesses big and small have flourished on the guarantee of free travel. EU statistics show people making 1.3 billion crossings over the union's internal borders each year, while 57 million trucks transport goods worth hundreds of billions over those same boundaries annually. The free passage has also allowed some 1.7 million people to live in one country and commute to work in another.

Cities such as Malmo in southern Sweden and the Danish capital Copenhagen have in effect fused, reflecting how the EU has turned from a community of nations separated by borders to one of regions. But in the wake of the refugee crisis, the whole idea of open EU borders has been called into question.

Each country in the zone is allowed to unilaterally put up border controls for a maximum of six months. France did so after the Nov. 13 terror attack, and following the influx of more than 1 million migrants into Europe last year, Germany, Austria, Denmark, Sweden and Norway have done the same. Now, policymakers are poised to invoke an emergency provision that allows for an extension of such controls for up to two years, citing Greek problems in properly protecting the bloc's external borders from the flow of migrants fleeing war and poverty in the Middle East, Asia or Africa.

That could open the gates to broader border restrictions. But even if full disintegration of border-free travel among the 26 does not seem imminent, some governments already are bracing for the possibility. Under such a scenario, a French government study sees an 8-percent reduction in economic activity in the zone over the next decade amounting to 110 billion euros nearly $124 billion

Alexander Klacska, whose Austrian company runs more than 500 tanker trucks across Europe, cites a study based on three hours of waiting time for trucks a day on Austria's borders to and from its seven neighbors. He says the extra costs per day would total nearly 8.5 million euros (over $9.5 million) for truckers doing business in and out of the country. A suspension of Schengen would mean "massive limitations for our company," he says. "We're very interconnected with Germany, with Slovakia, with Italy, all places where whole economic regions have grown together where borders have disappeared."

As he picks up his highway toll sticker for Hungary on the Austrian border, Dutch trucker Jack van der Veen recalls how he once waited for over two hours at the French port city of Calais for clearance to enter non-Schengen member Britain through the tunnel beneath the English channel. He describes the tough inspections there, where migrants try to sneak onto trucks bound for Britain, as the worst-case scenario that could potentially mean truckers are "stuck all day" waiting.

International transport could also suffer in other ways. German railway chief Ruediger Grube has warned that "if borders are closed, the railway will have to discontinue direct connections to foreign countries.

"The checks and delays that would then be incurred would not be sustainable," he told German tabloid Bild Zeitung.

Grube's Austrian counterpart, Gerhard Kern, is more optimistic. "No one should be anticipating that Europe will again be divided into separate parts," he says. "This would result in such a destruction of prosperity that we should all keep a cool head and find (other) solutions."
RELATED TOPICS