Turkish pipelines to provide Cyprus with water after agreement signed 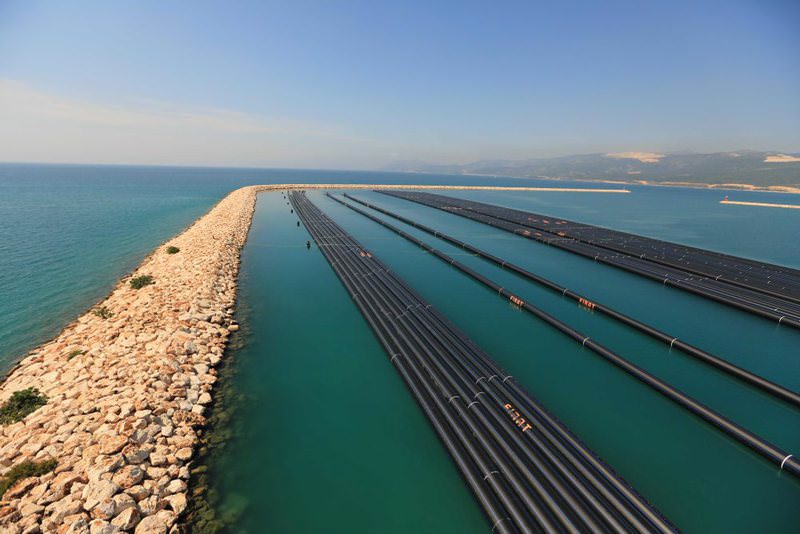 The agreement to authorize Turkish pipelines to provide Cyprus with water was finally signed between Turkey and Turkish Cyprus. Prime Minister of Turkish Cyprus Kalyoncu said this agreement would result in peace

Turkey's project to supply drinking and irrigation water to Turkish Republic of Northern Cyprus (TRNC) through the Northern Cyprus Water Supply project was finalized with an agreement signed between Turkey and Turkish Cyprus at the Çankaya Mansion in Ankara.

Turkish Cypriot Prime Minister Ömer Soyer Kalyoncu said the deal would benefit Greek Cyprus as well when a comprehensive solution is realized and a federal republic is established. Kalyoncu said his government believes that water should be used for peace and convergence. During such a sensitive period when negotiations are in progress between the two nations, sustaining positive relations between Turkey and Turkish Cyprus is crucial, according to Kalyoncu.

Having been on Turkey's agenda since the 1990s, the project, which commenced in 2011, will provide sufficient quantities of water for 30 years. To transfer water, an underwater pipeline was established to connect Turkey to Turkish Cyprus where 75 million cubic meters of water will be supplied per year from the southern town of Anamur's Dragon Stream to the Geçitköy Dam located near the Turkish Cypriot city of Girne, also known as Kyrenia. Half of the supplied water will be used as drinking water while the other half will for irrigation.

Irrigated farmland will be available on a 48-hectare area thanks to the project. Water will be transferred through an 80-kilometer undersea pipeline that lays 250 meters below the Mediterranean Sea. The pipeline has built-in sensors and transmitters to signal any possible faults or if a segment is in need of urgent repair.

Speaking at the opening ceremony of the Alaköprü Dam in October 2015, President Recep Tayyip Erdoğan said: " Turkish Cyprus will no longer experience shortages of drinking water and agricultural irrigation as it has for a half a century." He also called the project a "proud investment."

Also speaking at the ceremony, Prime Minister Ahmet Davutoğlu said the project had cost TL 1.6 billion ($576.3 million). "We built a magnificent water bridge. This time, we are linking Girne with Anatolia with water," Davutoğlu said, adding that he hopes the water will bring "peace" to the island.

Turkish Cypriot President Mustafa Akıncı and Kalyoncu were also in attendance. "This will lead to growth ... in the economy," Akıncı said in his speech at the ceremony. "Today is a milestone. We have to use this water effectively," he added.

Land prices in Turkish Cyprus have tripled and are expected to increase 300 percent over the next two years since new pipelines have started delivering water to the island from Turkey. Additionally, 25,000 families currently work in agriculture on the island, but this number is expected to increase 40 percent. Experts claim this increase is realistic, considering that the island is not chemically contaminated so it is not infertile and the island has large potential for the supply side of the agricultural sector. As a result, this shows that agriculture and its related employment could well rise due to the project.