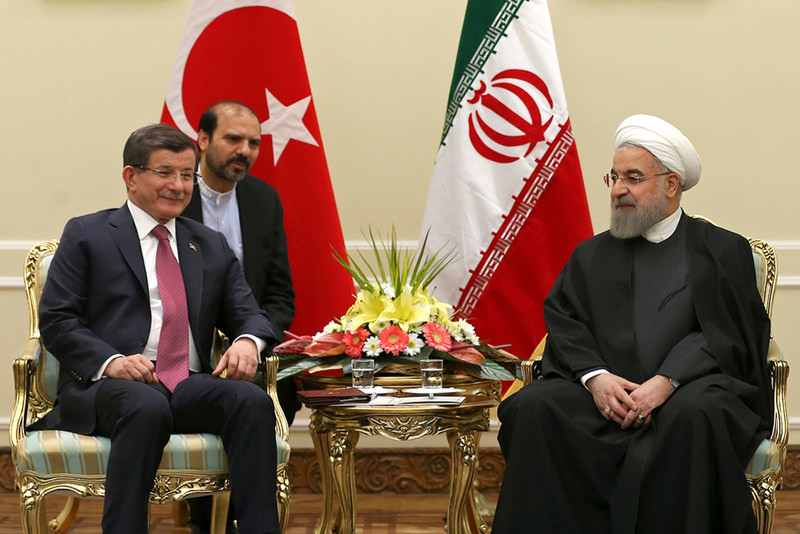 Following the Turkey-Iran Business Forum, both countries agreed that the preferential trade agreement should soon be put into effect, paving the way for free trade agreements in the future

Prime Minister Ahmet Davutoğlu attended the Turkey-Iran Business Forum in Tehran over the weekend, and called for Turkish and Iranian businesspeople to lift the barriers on trade between the two countries. "We negotiated and agreed to no delays in the implementation of a preferential trade agreement. We will lift the customs wall in a way that will propel efforts toward a free trade agreement following the preferential trade agreement," Davutoğlu said, stressing his visit was the start of a new period in Turkish-Iranian relations.

He added that they are taking serious steps in the infrastructural sector regarding highways, railways and airports. "Within the next period, we will
strengthen our relations for the construction of railways between the Mersin and Trabzon ports and the Port of Bandar Abbas, as well as the high-speed train line in Turkey and the line in Iran, which will lead to Tebriz," Davutoğlu said, also adding that the banking systems would step in to support the investments in both countries.

Prime Minister Ahmet Davutoğlu's visit to Iran is the first step in a series of diplomatic and economic talks that Turkey and Iran plan to hold in the near future. Since sanctions connected to Iran's nuclear program were lifted, Turkey and Iran now aim to reach an annual trade volume of $35 billion. Diplomatic talks between the two countries are at the top of the agenda in the Turkish business world, which has begun seeking business opportunities in the country.

Meanwhile, bilateral diplomatic talks between Turkey and Iran are being closely monitored by the United States, the European Union and Russia. High-level diplomatic relations between Turkey and Iran came to a standstill due to fundamental disagreements regarding Syria, culminating with Iranian Foreign Minister Mohammad Javad Zarif's canceled visit to Turkey last year. One of the major problems between Turkey and Iran is their differing policies on Syria, as Iran supports the regime of Bashar Assad. In addition to providing diplomatic support to the Assad regime, Iran continues to send military support and arms to assist regime forces on the battlefield. Moreover, Iran and Russia have common interests in Syria, which accounts for the two countries acting in unison in both intentional and unintentional ways.

Turkey and Iran are working to improve relations despite clashing intensely over the Syrian conflict. There are some economic and political realities behind this discrepancy. Although the basic problem concerns regional policies, bilateral relations do not face a major threat. Both countries rely on a "strategic mind, strategic patience" modus operandi, and are willing to implement a political understanding that is based on the development of economic and commercial relations. Reports say that, within the framework of this understanding, Turkey and Iran have been preoccupied by intense bilateral communication in recent months, such as each country paying a series of diplomatic visits to each other. The latest of these included a trip to Ankara for Iran's deputy foreign minister for Asia and Pacific affairs, Ebrahim Rahimpour, last month. After a series of intensive talks between the two countries at the Foreign Ministry, an agreement was reached to a certain degree. Accordingly, Davutoğlu's visit to Tehran on March 4 constituted the first step of the agreed upon bilateral talks.

Unless an amendment is made to the scheduled visit, Zarif will visit Turkey, and the 25th meeting of the Joint Economic Commission (KEK) is slated to be held in Ankara in the upcoming months. Additionally, a trilateral meeting will be held between the Turkish, Iranian and Azeri foreign ministers in Tehran.

The highest level visit will be that of Iranian President Hassan Rouhani, who is scheduled to arrive in Turkey as a part of the High Level Strategic Cooperation meeting. The Turkish business world is highly interested in Iran, and a delegation from the Turkish Industrialists' and Businessmen's Association (TÜSİAD) is expected to visit the country.

With the United Nations announcing that sanctions on Iran related to its nuclear program were removed in mid-January, the U.S. and the EU also decided to lift economic sanctions on the country. With the removal of these sanctions, Turkey and Iran, which have deep-rooted cultural and historical ties, have become two important potential markets for each other. Authorities from both countries aim to increase the bilateral trade volume to $35 billion per year. This commercial potential is one of the most important motives pushing Turkey and Iran to improve relations despite disputes on Syria and the region.
RELATED TOPICS