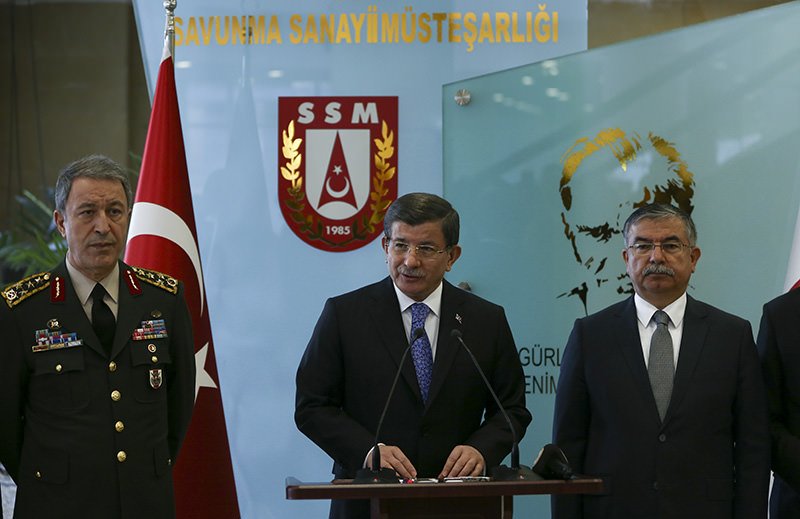 | AA photo
by Daily Sabah Mar 09, 2016 12:00 am
Prime Minister Ahmet Davutoğlu said the government has approved new defense projects totaling $5.9 billion, $4.5 billion of which will be designated to domestic production projects. The premier made the comments after a meeting with the defense industry on Wednesday.

In the first two months of 2016, Turkey's defense industry exports increased 35 percent and, according to the prime minister, mass production of the national infantry rifle will begin this year. Davutoğlu also said that research developments regarding the production of a joint fighter aircraft have been revised.

Turkey has reached an important phase in the construction of armed, unmanned aerial vehicles. With the nationalization of ATAK helicopter engines and an additional 17 ATAK helicopters to be utilized this year, Davutoğlu said: "We will attach special importance to the armored vehicles that we need. We no longer need to depend on foreign technology for development of unmanned aerial vehicles. There have been no setbacks in the regional passenger plane project."

The defense industry has seen a sharp increase in developments since the early 2000s, and today the sector's total exports have reached almost $2 billion. Moreover, in the last few years, national projects, including a warship, battle tank and warplane, have attracted international attention.

Daily Sabah sat down with defense industry expert Arda Mevlütoğlu in November to talk about the current situation as well as the future challenges facing the defense industry.

According to Mevlütoğlu, a continuation of the positive trend in the industry depends on a number of factors and measures such as human resources, industrialization policies, the improvement of research and development and innovation capacity, interaction with other sectors and foreign relations. He said that Turkey can become a significant global player in the defense and aerospace industries only if serious measures and long-term policies are applied. If not, the Turkish defense industry could face the risk of becoming a museum of prototypes.
Last Update: Mar 09, 2016 4:02 pm
RELATED TOPICS