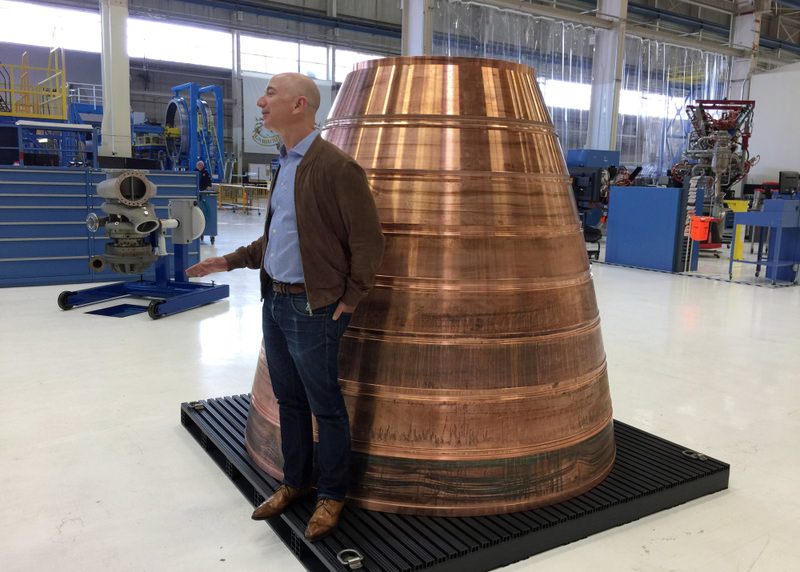 by Mar 10, 2016 12:00 am
Jeff Bezos' space company Blue Origin expects to begin crewed test flights of its reusable suborbital New Shepard vehicle next year and begin flying paying passengers in 2018, Bezos told reporters yesterday. Bezos' remarks, made during the first ever media tour of the Blue Origin manufacturing facility, marked the first time the billionaire founder of Amazon.com had put a target date on the start of the commercial space flights Blue Origin is developing.

"We'll probably fly test pilots in 2017, and if we're successful then I'd imagine putting paying astronauts on in 2018," Bezos said at the sprawling plant south of Seattle. The company expects to build six New Shepard vehicles, which are designed to autonomously fly six passengers to more than 62 miles (100 km) above Earth, high enough to experience a few minutes of weightlessness and see the planet set against the blackness of space.

Blue Origin's first reusable rocket was lost in a test flight in April 2015, though the capsule parachuted safely back to the ground. A second ship has made two test flights, and Blue Origin is in the process of assembling its next two vehicles, which, for the first time, include windows for paying passengers.

Blue Origin has not yet settled on a price for rides, but Bezos said it will be competitive with what other companies, such as Richard Branson's Virgin Galactic, are charging for similar flights.Galactic is selling tickets to fly on its six-passenger, two-pilot SpaceShipTwo for $250,000. The company last month unveiled its second spaceship and expects to begin test flights soon. The first SpaceShipTwo was lost during a fatal test flight in October 2014. Privately owned XCOR Aerospace, which is developing a two-person space plane called Lynx, is charging about $100,000 for one person to fly alongside a pilot. Bezos said he has invested more than $500 million in Blue Origin, which is on track to double its staff to about 1,200 within the next year. He said that he would continue to foot the company's bills "for as long as necessary."

Bezos expects Blue Origin to become profitable at some point. "I'm optimistic it will be a healthy business," Bezos said.

Blue Origin also is working on rocket engines for United Launch Alliance, a partnership of Lockheed-Martin and Boeing, and for Orbital ATK.

"It's very gratifying that the world's premier launch companies are choosing our engines," Bezos said.