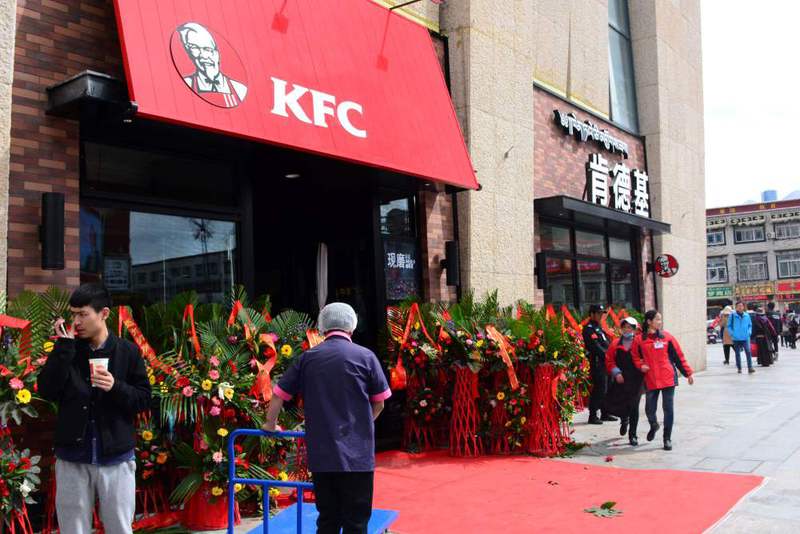 by Mar 10, 2016 12:00 am
The American fast food giant KFC opened its first restaurant in Tibet, the property manager said on Wednesday, more than a decade after the chain's first attempt to establish a foothold ended in controversy. Pictures posted online showed long lines at the counters, with dozens of flower displays and a red carpet outside the premises, in a shopping mall in the regional capital Lhasa.

"As a diehard fan of KFC I waited in line for ages, and felt like crying when I took my first lick of my ice cream cone," said one social media user.

The opening comes despite campaign groups expressing alarm over the store's presence when it was announced in December, and the Dalai Lama, Tibet's exiled spiritual leader and Nobel laureate, previously declaring that the cruel treatment endured by chickens raised and killed for KFC violated Tibetan traditional Buddhist values. China has ruled the majority Buddhist Tibet since the 1950s, while human rights groups have accused China of political and religious repression. Beijing insists that Tibetans enjoy extensive freedoms and that it has brought economic growth to the region, and accuses the Dalai Lama of separatism. The official Xinhua news agency said that more foreign brands were "hoping to do business in the region" as infrastructure improved.

KFC entered China in 1987, and now has just over 5,000 outlets in more than 1,100 locations across the country, most of them company-owned, parent Yum Brands says on its website. It has said it intends to spin off China operations into a separate company. The Lhasa KFC opened Tuesday, a woman from the Shenli Shidai shopping center property rental department confirmed to AFP. Yum declined to comment to AFP Wednesday on the opening, but after plans for the restaurant were announced in December, a Yum representative said it would "provide employment opportunities, and support the development of the regional supply chain" and "incorporate local design elements."

Images of the interior posted online showed a large image of the Potala palace - once the residence of the Dalai Lamas - and triangle motifs labelled with Tibetan mountain names in English, among them Qomolangma, the local designation for Everest.
RELATED TOPICS