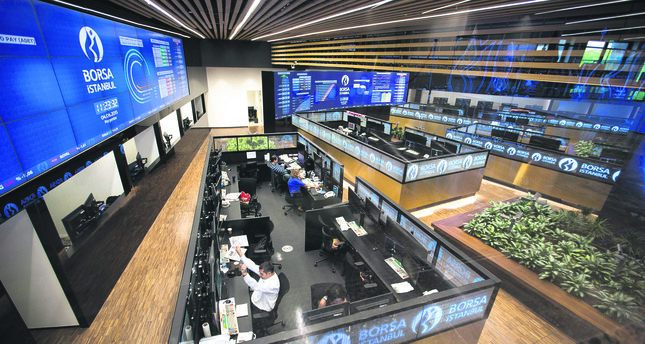 The Borsa Istanbul rebounded after the European Central Bank's decision to increase asset purchases. The decision is expected to have positive impacts on the Turkish economy and relieve the country's central bank

The relief from turmoil in global markets and the recovery of a risk appetite following the European Central Bank's (ECB) monetary policy meeting on Thursday at which the body decided on a new round of stimulus to revive the European economy, has led to an increase in domestic and international markets. The Borsa Istanbul Stock Exchange's main 100 Index (BIST 100) started the day at 79,565 points with a 541-point increase. Shares rose by 0.68 percent on average in the opening session. The index rebounded due to profit sales after the opening after having previously dropped down to 78,743 points. The index ended the morning at 79,193 points, marking a 168-point increase.

The ECB fulfilled market expectations on Thursday's governing council meeting and the decisions it made to invigorate the economy supported markets. Today, markets do not have significant internal or external data for close analysis.

Asian stock markets continued to make profits after the ECB expanded its monetary policy in an aggressive manner and signaled that the space for launching more interest rate cuts was shrinking, although other monetary incentive alternatives were open.

The MSCI index, which follows Asia Pacific stock markets with the exception of Japan, soared by 0.32 percent, while Japan's Nikkei index declined by 0.9 percent due to the rise in the yen. Meanwhile, the Shanghai index dropped by 0.8 percent as the People's Bank of China renewed its commitment to keep the yuan at a high level.

As ECB President Mario Draghi underlined that a further interest rate cut was not possible, U.S. indices ended the day in a horizontal trend, although the ECB provided more monetary support to markets. The Dow Jones dropped by 0.03 percent to 16,995,13 points and the Nasdaq declined by 0.26 percent to 4,662,16 points, while the S&P 500 increased by 0.02 percent to 1,989,57 points.

American futures are being traded at nearly 1 percent as of this morning.

Analysts suggest the European Central Bank's (ECB) decision to increase asset purchases to 80 billion euros on Thursday will have positive impacts on the Turkish economy in the short term and relieve the Central Bank of the Republic of Turkey (CRBT).

Özkardeşkaya said that the ECB'S monetary expansion decision might have indirectly positive impacts on the Turkish economy, adding that additional liquidity could strengthen the economy as well. She suggested that real sector activities in the eurozone will also grow with the additional liquidity and that this growth's reflection on the real economy will bring positive results for the country's economy in the short and long term.

London-based Oxford Economics analyst Nafek Zouk said Turkish assets and the lira will benefit from the current situation in the short term, as the ECB's monetary expansion is occurring at a time when risk perception of emerging markets has declined.

International credit rating agencies are expected to evaluate the ECB's monetary expansion decision as a "supportive factor" for Turkey in the future. In last October's report, Standards & Poor's (S&P) estimated that the ECB would maintain its monetary expansion program until 2018, increasing it to 2.4 trillion in total.