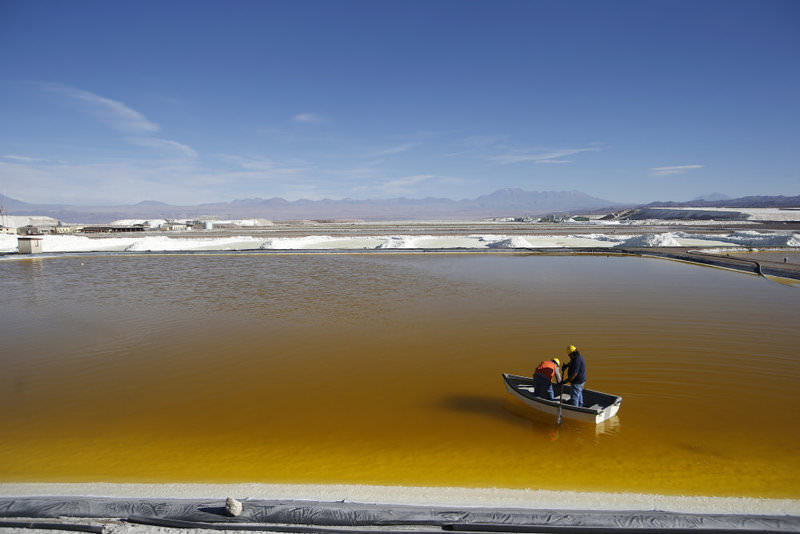 Workers use a boat to take samples from a brine pool at the Rockwood Lithium Plant on the Atacama salt flat, the largest lithium deposit currently in production, in the Atacama desert of northern Chile.
by Mar 17, 2016 12:00 am

Lithium which is used in consumer devices like cell phones and electric cars, drives much of the modern world. Over half of the earth's identified resources of the mineral are found in Chile, Argentina and Bolivia

Far from the soy and cattle that dominate its vast fertile pampas, Argentina harbors another valuable commodity that is rocketing in price and demand and luring newly welcomed foreign investors. Lithium, the so-called "white petroleum", drives much of the modern world. It forms a small but essentially irreplaceable component of rechargeable batteries, used in consumer devices like mobile phones and electric cars. It also has pharmaceutical and other applications. Over half of the earth's identified resources of the mineral are found in South America's "lithium triangle", an otherworldly landscape of high-altitude lakes and bright white salt flats that straddles Chile, Argentina and Bolivia. Until recently, that was not great news for investors. Argentina and Bolivia lacked predictability and a friendly business environment, while Chile kept strict control over lithium output. But that may be all about to change.

In Chile, a sale of state lithium deposits and a shake-up in the way the country manages its resources has awakened interest from everyone from early-stage mining companies to electric carmakers like Tesla.

In Argentina, already the world's no. 3 lithium producer after Chile and Australia, investors are hopeful that the new Mauricio Macri government that took over in December will herald a brighter future. Business-friendly Macri has begun making sweeping changes in a bid to return the country to economic orthodoxy, removing onerous capital controls and sending a message that the country is open for business again after more than a decade of protectionism.

"For 10 or 12 years, (Argentina) was a do-not-invest zone. The tone of doing business has just swung 180 degrees," said Tom Hodgson, the chief executive of Western Lithium, which is developing a project in the country due to begin production next year.

Argentina now has a "major opportunity" to build a lithium export business, Hodgson told Reuters earlier this month at a mining conference in Toronto.

Western Lithium is working with Korean steelmaker POSCO, whose chairman was in Argentina last month to meet with Macri and begin the construction of a new lithium plant, due to begin commercial production within a year. The exploratory mining company Orocobre is also developing a project.

But the company perhaps best set to benefit from an Argentine lithium revolution is U.S. agricultural and chemical conglomerate FMC Corp. FMC is already producing lithium from the Salar de Hombre Muerto salt flat in northern Argentina. Lithium provides a small but growing part of FMC's revenues, with forecast sales of around $250 million this year. Demand for lithium is set to outstrip supply by 2023, according to specialist consultants Stormcrow Capital, with the lion's share coming from rechargeable batteries. Bolivia has more identified lithium resources than any other country, but commercially it's likely to be "shunted to the side for an extended period", says Jon Hykawy, Stormcrow's president. Bolivia has natural challenges - too much rain, other chemicals in the mix - as well as a prickly investment environment.

Chile, though, is popular with investors for its free market credentials, while the dry desert climate is "perfect" for lithium production, said Brian Jaskula, a U.S. Geological Survey mineral commodity specialist. The key lithium site in Chile is the vast Salar de Atacama salt flat, where local firm SQM and foreign-owned Rockwood have operations. SQM was privatized in the 1980s during General Augusto Pinochet's regime and a former son-in-law of the late dictator owns a controlling stake. But it is on uneasy terms with the current leftist government. In the last two years, it has run afoul of authorities over market manipulation and dubious tax invoices, and is in arbitration with economic development agency Corfo over royalties.

Now U.S. specialty chemicals firm Albemarle Corp is muscling in on SQM's turf. Having spent $6 billion last year to buy Rockwood, it then signed a deal with Corfo in its drive to triple lithium output in Chile. Chile's government said it sees public-private partnerships as the way forward and is planning to put more deposits up for tender.

Industry insiders warn that, no matter how friendly the government, the process of ramping up output is a complex one. That leaves battery makers and other end users of lithium largely at the mercy of the big providers. In addition to Tesla, traditional car companies including Nissan and BMW operate in the burgeoning electric vehicle industry. Germany's Daimler recently announced that it would build a new lithium-ion battery factory, while technology firms like Samsung and Foxconn are also key users.

As prices rise, they are keen to lock in deals. Lithium carbonate is selling for $6,400 per kilo, up from $5,180 in 2011. Prices in the opaque Chinese market are reportedly higher. Tesla and other car manufacturers have been to Chile to see if they could ensure future lithium supplies, according to Ignacio Moreno, Chile's deputy mining minister.

Battery makers "are looking for any source across the world that they can establish joint ventures with, no matter how risky they are," said Jaskula.