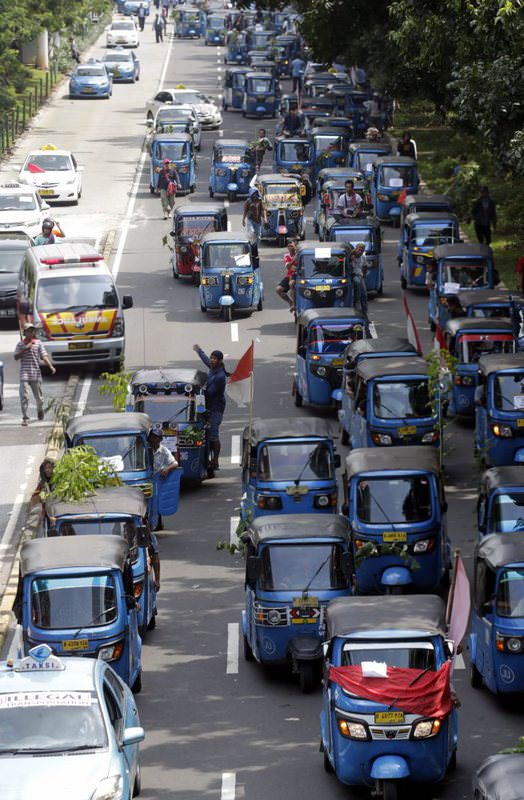 Thousands of taxi drivers caused traffic chaos in the Indonesian capital on Tuesday in a violent protest against what they say is unfair competition from ride-hailing apps such as Uber.

TV footage showed long lines of taxis and three-wheel minicabs blocking a central expressway, men setting tires alight and jumping on vehicles that refused to join in the protest. Green-jacketed drivers for Go-Jek, an app used to hail motorcycle taxis, retaliated by hurling rocks and other objects. An Associated Press reporter saw drivers surround one taxi, forcing its terrified female passenger on to the road with her luggage.

It was the second major protest by taxi drivers in Jakarta this month and was large enough to halt the motorcades of Indonesia's president and vice-president. Drivers say competition from ride-hailing apps, which don't face the same costs and rules as regular taxis, has severely reduced their income. Many come to Jakarta from other parts of Indonesia and support their families as taxi drivers. Driver Jeffrey Sumampouw said his earnings have slumped more than 60 percent since Uber and other apps starting getting popular in Jakarta about a year ago. "The government must defend us from illegal drivers who have stolen our income," he said. "We almost cry every day because it's difficult to get passengers."

Smartphone-based apps such as Uber have turned the public transport industry on its head worldwide. In the U.S. and Europe, the apps have been acclaimed by urban customers tired of struggling to find cabs, while taxi companies accuse the mavericks of running unlicensed services. Uber has been making a big push into Asia, intensifying competition in a region where there already was a slew of ride-hailing apps such as Malaysia's Grab, which operates in several Southeast Asian countries including Indonesia.

On Monday, Grab said it had formed a strategic partnership with Lippo, which is one of Indonesia's largest conglomerates, and claimed its "GrabCar" business in Indonesia grew 30 percent last month. Go-Jek, an Indonesian startup that hails motorcycle taxis and provides other services like document and food delivery, has also exploded in popularity in the past year. The demonstrations yesterday elicited little if any sympathy from commuters in a city of 10 million people that already suffers massive congestion.

"This protest is so terrible. They really are rude and overbearing. I was very hurt," said Dewi Gayatri, who missed her flight for a business trip to Makassar in eastern Indonesia. "I still like Uber, and hope the government protects Uber, because it's so easy to order and cheaper," she said. Indonesia's vice president Jusuf Kalla complained it was the first time his motorcade had been stuck in traffic since being elected nearly two years ago. Kalla, who was on his way to pay respects to 13 army officers killed in a helicopter crash in Sulawesi on the weekend, said "technology could not be resisted."