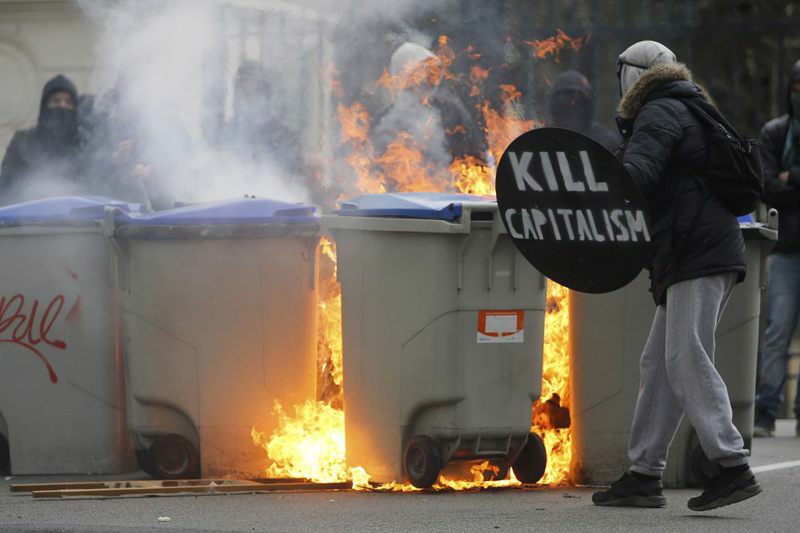 To protest the labor law, transport staff went on strike and people hit the streets, initiating the fourth protest within a month. Already criticized for the high unemployment rate, the popularity of President Hollande seems to be declining

French rail and air traffic suffered serious disruption Thursday after transport staff stopped work and took to the streets along with high-school students to challenge plans for a pro-business loosening of the country's protective labour laws. The day of protest, the fourth in a month, has been billed by local media as a make-or-break test of strength for President Francois Hollande, plagued by low popularity and a jobless rate stuck stubbornly above 10 percent as mid-2017 elections loom. The three protests to date have been low-key by the standards of past French strikes, but organisers hope tomobilise more people this time.

France's SNCF state railway company said stoppages among its staff had cut some services by 40 to 50 percent. About one in five flights were cancelled at Orly airport south of Paris, the DGAC air transport authority said.

Under rainy skies, secondary-level school pupils mobilised in Paris and dozens of other cities for protest marches alongside those called by labour unions.

At issue is a proposed overhaul of France's labour code, a set of regulations bosses claim deters recruitment. Critics say the reforms will lead to worse working conditions and more sackings.

The reforms, due to be debated in parliament next week, would give employers more flexibility to agree in-house deals with employees on working time.

The protests come a day after Hollande, who has said he will not run for re-election if he fails to make a dent in the jobless rate, abandoned another piece of legislation - plans to strip convicted terrorists of French citizenship. That climbdown was forced on him by other lawmakers, many of them in his own camp.

Video footage relayed on social media showed some hooded youths jumping on cars and taunting police. CGT chief Martinez played down reports of a dozen arrests, saying there was often a bit of trouble caused by "some people who have nothing to do with the issue".

Hollande's government, desperate to deliver on his so far elusive commitment to reduce high unemployment, watered down its reform proposal shortly before it was unveiled this month by ditching a clause that would have capped severance pay awards.

Economists fault the French system for creating a divide between people with open-ended work contracts and first-timers condemned to move from one short-term job to another because of employer reluctance to commit to long-term contracts.