CEOs give two thumbs up to investing in Turkey 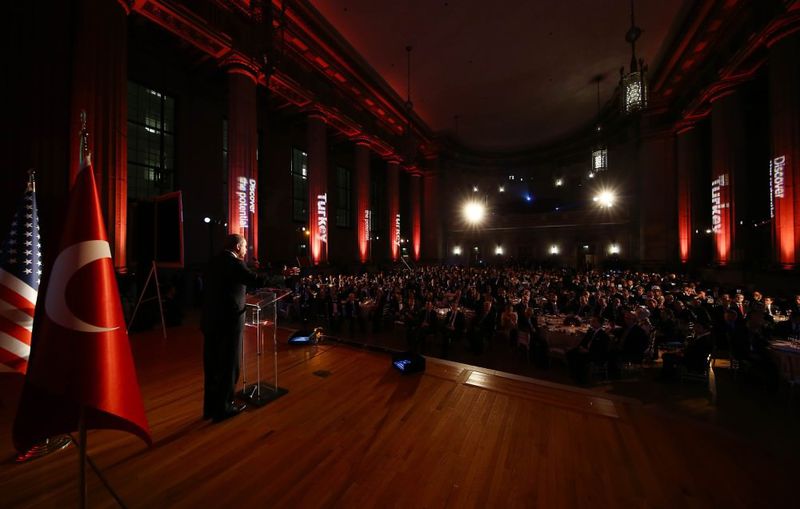 After meeting with President Erdoğan in Washington, the heads of 21 of the world's commercial giants noted that it is not only Turkey's potential that draws their attention to invest in the country, but also Erdoğan's leadership

The CEOs of the 21 largest companies in the world who met President Recep Tayyip Erdoğan at a roundtable meeting during his recent visit to Washington said that they are attracted not only by Turkey's power, but also the sense of trust that Erdoğan gives. Delivering a speech at the meeting, Erdoğan said that previous strategic partnerships between Turkey and the U.S. grew into a model partnerships during U.S. President Barack Obama's time in office. He invited American investors to make investments in Turkey compatible with the existing strategic and model partnerships. Erdoğan underlined that Turkey does not find the current investments of American business in Turkey adequate, adding that he would like to see more American investment in the country.

Following Erdoğan's speech, the presidents of the 21 companies expressed their opinions about Turkey. Lockheed Martin CEO Marillyn A. Hewson said that leaders from 56 countries were in Washington to attend the Nuclear Security Summit. All these leaders demanded to hold talks with the representatives of leading American companies, however, the meeting with highest participation was held with the president of Turkey, as a country that has been engaged in cooperation with the U.S. in the defense industry for 60 years.

Coca-Cola Company CEO Muhtar Kent, who moderated the roundtable meeting, said that he has never seen such "a successful meeting as this," even though he has been attending this kind of meeting for 20 years.

Citibank President Michael O'Neill stated that Turkey, under the leadership of Erdoğan, is doing great despite going through hard times in a challenging region.

Dow Chemical CEO Andrew N. Liveris, who initiated an investment of $1 billion in Turkey in 2011 when Erdoğan was prime minister, pointed to new investments in the country. He said that Dow Chemical, which has two production facilities in Kocaeli at the moment, will speed up its investments in Turkey.

During an interview with Daily Sabah, ISPAT President Ermut said that Erdoğan is like the honorary chairman of ISPAT, as it would take some six months to get an appointment from the CEOs of the world's leading 21 companies were it not for Erdoğan's initiatives. "It is a great advantage for us to see so many influential CEOs together. This is a golden opportunity due to Erdoğan attracting investments to our country. Now our task is to observe the connections that we developed here and to more rapidly bring the investments that Turkey deserves."

ÖİB President Bostan said that this meeting was a good opportunity to observe foreign investors' interest and confidence in Turkey, adding that giant American countries have absolute confidence in the country. "We saw that Turkey is the only country among emerging economies that is promising for the future and that has a success story. Turkey's high growth figures despite geopolitical risks grabbed a great deal of attention. I think foreigners expect us to believe in ourselves and our potential," he underlined.

In an interview with Daily Sabah following the meeting, Erdoğan said that this was a meeting that indicated an investment of $1 trillion in Turkey, stressing that the amount of foreign investment in Turkey will increase.
RELATED TOPICS