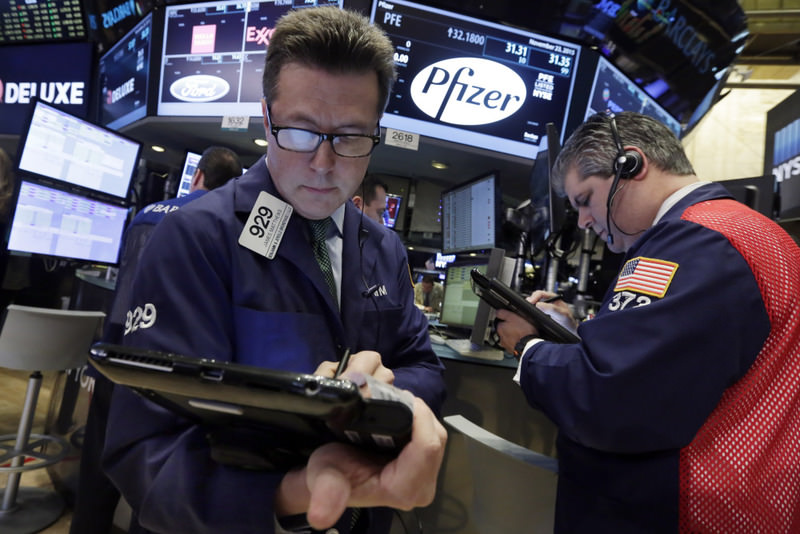 Traders work at the post that handles Pfizer on the floor of the New York Stock Exchange. Allergan and Pfizer yesterday called off a record $160 billion merger after the Treasury issued new rules to make ,tax inversions, less lucrative.
by Associated Press Apr 07, 2016 12:00 am

The biggest U.S.-based drugmaker, Pfizer Inc., will stay put thanks to aggressive new Treasury Department rules that succeeded in blocking Pfizer from acquiring rival Allergan and moving to Ireland at least on paper to reduce its tax bill. As analysts and investors had expected, the two companies called off the record $160 billion merger early Wednesday "by mutual agreement." Pfizer cited Treasury's new regulations, issued late Monday, to make such "tax inversions" less lucrative. The merger would have moved Pfizer's address but not its operations or headquarters to Ireland, where it would pay far less in corporate taxes.

Pfizer Inc., based in New York, has agreed to pay Dublin-based Allergan PLC $150 million for reimbursement of expenses. Now the two drugmakers will focus on other strategies to boost profits and sales quickly, with Pfizer saying it will decide by year's end whether to separate its global established products business, which sells older, mostly off-patent drugs. Pfizer has endured years of relentless pressure from analysts and others to break up the company so growth and profits could accelerate.

"We remain focused on continuing to enhance the value of our innovative and established businesses," Pfizer CEO Ian Read said in a statement. "We believe our late-stage pipeline has several attractive commercial opportunities with high potential across several therapeutic areas," Read added. "We also maintain the financial strength and flexibility to pursue attractive business development and other shareholder-friendly capital allocation opportunities."

Allergan's CEO, Brent Saunders, said in a statement that his company is "disappointed that the Pfizer transaction" won't happen, adding that "Allergan is poised to deliver strong, sustainable growth." "Allergan is focused on delivering growth from an efficient operating structure while also being committed to investing in R&D," Saunders said. His company as scheduled a morning conference call to discuss its plans and answer questions.

Meanwhile, Allergan is still in the process of selling its generic drug business for $40 billion to Israel's Teva Pharmacueticals Industries Ltd., the world's top generic drugmaker. That deal may be delayed due to scrutiny from antitrust regulators in multiple countries.

The companies' decision could deter other tax inversions in the works exactly the impact the Obama administration is seeking by having Treasury issue 300-plus pages of new regulations that remove or reduce key financial benefits of a tax inversion. Pfizer had expected to save hundreds of millions of dollars in U.S. taxes annually under its planned deal with Allergan.

Read, Pfizer's CEO for five years, has said the deal was needed because U.S.-based drugmakers are at a major disadvantage to their multinational rivals based in Europe and elsewhere, who face lower corporate tax rates. Other U.S. companies likewise have complained about the top U.S. tax rate which few ever pay and the U.S. taxing them on profits made overseas.

With Pfizer's planned inversion looking like the start of a dreaded trend, tax inversions became a hot issue in the presidential race, with some candidates calling companies considering such deals "unpatriotic." And on the heels of the new Treasury rules, President Obama held a news conference Tuesday afternoon, saying the rules are meant to prevent "one of the most insidious tax loopholes out there" and make wealthy corporations shoulder their tax responsibility like working class Americans.

In an inversion, a big company buys a smaller one in another country, usually with a lower tax rate, then moves the combined company's address on paper but little else to that country. Allergan itself is the result of multiple inversions, and despite its Dublin address is operated from offices in Parsippany, New Jersey. That's not far from Pfizer's high-rise headquarters near Manhattan landmarks such as the United Nations complex and the theater district. The Allergan deal was Pfizer's third and most expensive attempt at an inversion, including its failed hostile attempt to acquire Britain's AstraZeneca PLC in 2014.

Pfizer has a history in this century of doing mega-acquisitions that allow it to cut costs and increase sales to boost profits quickly. That has kept Pfizer among the top global drugmakers but hasn't pleased investors enough, which ultimately led to the ouster of CEO Ian Read's predecessor late in 2010.

Read noted that Pfizer has returned to its original timeline for deciding whether to spin off or sell its established products business, which accounted for nearly half of Pfizer's $49.6 billion in revenue and $9.1 billion in net income in 2015. The company had pushed that decision back to 2018 because of the planned inversion.
RELATED TOPICS