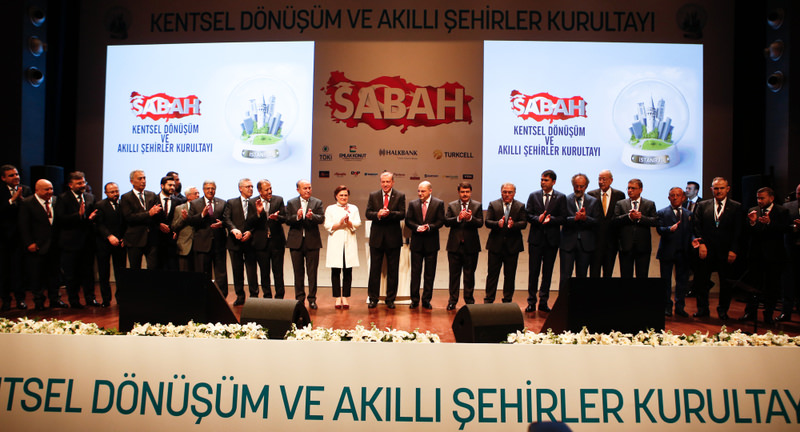 President Recep Tayyip Erdou011fan (C) and CEOs of Turkey's leading construction companies standing for a family photo at the Urban Development and Smart Cities Assembly organized by the Sabah daily.
by Daily Sabah Apr 13, 2016 12:00 am

Organized by Sabah daily, the Urban Development and Smart Cities Assembly recently unveiled recommendations that concern Turkey's more than 80 million residents. The assembly drafted a declaration consisting of 20 articles that include the steps needed to be taken and the issues that should be addressed in order to improve and govern urban development as well as create more high-tech cities.

All key public and private sector urban development institutions took part in the meeting, and both sectoral representatives as well as government officials reached consensus on the 20-point declaration. It details a new road map that needs to be drawn, one that includes new architectural considerations, environment-friendly practices and the development of smart cities, as well as new financing methods for lower-income earners to live in comfortable and modern residences.

The 20-point declaration, which recommends developing new land to build more modern cities close to social housing projects that appeal to multiple price ranges while also reconsidering interest policies, will be submitted to the government, the Presidency in particular. The articles of the declaration include the following:

1. Turkey, where the transformation of 6 million housing units is obligatory, should switch to vertical architecture in which people can enjoy nature more comfortably. Legal infrastructure should also be prepared in order to establish smart and environment-friendly cities.

2. The increase in value that will occur as a result of urban development should be equally distributed to all shareholders.

3. Urban development should be handled holistically, and the projects with financial dead ends should be subsidized with profitable ones.

4. All probable earthquake risks should be eliminated through planned urban development and by involving long-term implementation strategies in such development master plans.

5. The need for land required for urban development should be primarily covered by publicly owned land.

6. Infrastructure and reinforcement areas should be constructed among all socially and environmentally friendly projects that are providing an economic return

7. Participation banks should develop alternative financing methods for urban development. In this context, legal regulations should be prepared for the use of instruments such as sukuk (Islamic bonds).

8. In order to prevent overdevelopment in cities, urban development contractors working in areas with no increase in comparables should be supported by publicly-held lands at appropriate prices.

9. Foreigners who buy residential property should be given incentives such as citizenship or long-term residential permits.

10. Instead of on-the-spot development, master-planned and self-contained new cities and towns with education buildings and power facilities should be constructed.

11. As a country that imports many types of energy, smart cities that can provide maximum energy savings, consume the minimum amount of water and recycle rainwater should be encouraged.

12. In order to speed up urban transformation projects, municipalities and public authorities should intervene in meetings between shareholders and contractors.

13. The interest rates should be raised to an encouraging level for development investors.

14. A fund should be established by the Environment and Urbanization Ministry and the Culture and Tourism Ministry to promote development internationally, which should also include real estate developers.

15. The right of withdrawal in the sector should be re-organized. Citizens' right to get their money back should be redesigned in such a way as to not inconvenience the companies doing their jobs in a fair and appropriate manner.

16. New implementation schemes are needed to calculate the rate of value added tax (VAT) on housing developments. VAT totaling 18 percent should be graded. Additionally, unfair competition created by companies operating off the record should be prevented.

17. The vested rights of municipalities should be re-evaluated. Municipalities are able to turn a project area into a green zone or a hospital area even after the building has reached a certain extent. This implementation, which wastes both money and time, should be rewritten.

18. The Treasury should reserve a "qualified fund" to use for housing projects. From the general budget or the sales of alcohol and tobacco, shares should be reserved for urban transformation.

19. Turkey should establish trademark cites. By turning cities such as Istanbul, Bursa and Gaziantep into trademark cities within the framework of the urban development projects, they should then be promoted to foreigners. Both investors and tourists should be attracted to these places as well.

20. Modern buildings should bear traces of Seljuk and Ottoman architecture. The public authority's incentive mechanism should be improved so that the number of neighborhood-style projects can increase.
RELATED TOPICS