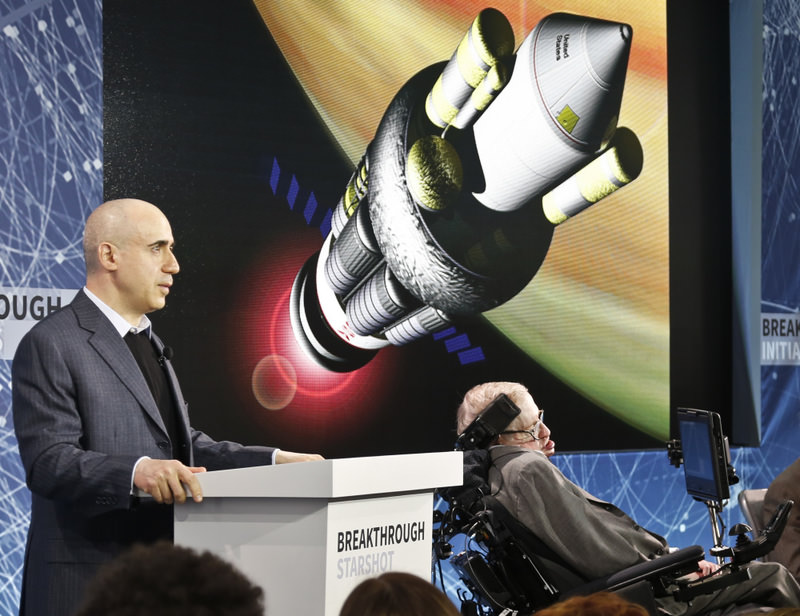 by Apr 14, 2016 12:00 am
Billionaire Russian investor Yuri Milner and British cosmologist Stephen Hawking on Tuesday announced an ambitious new space initiative for a mission to Alpha Centauri, the nearest star system to Earth. Milner and Hawking are spearheading the "Breakthrough Starshot" team of scientists working on the bold research program to create a fleet of super-compact, ultra-light space vehicles or "nanocraft."

The goal is to send the light-propelled mini spacecraft - each no bigger than a cellphone - to Alpha Centauri, which is 4.37 light years away, or 25 trillion miles, from Earth. They estimate it could take about 20 years to reach the star system from the time of the launch - rather than the 30,000 years it would take with today's fastest spacecraft.

"Space travel as we know it is slow. How do we go faster and how do we go further? How do we make this great leap?" Milner, who is planning to initially commit $100 million to the project, said during a press conference in the New York City borough of Manhattan. "For the first time in history, we can do more than just gaze at the stars. We can actually reach them," added the 54-year-old Russian philanthropist, whose fortune is estimated at $2.9 billion by Forbes. "It is time to launch the next great leap in human history."

Milner - one of the original investors in Facebook - said the team hoped to send a super light robotic spacecraft streaking through space at 60,000 kilometers per second - about 20 percent the speed of light. The initiative will work by creating a giant laser array to propel the mini-probes - which would deploy micro-sails - toward a given star, creating what Milner likened to an "interstellar sailboat."

"The Breakthrough StarChip concept is based on technology either already available or likely to be available in the near future. But as with any moonshot, there are major engineering problems to solve," Milner cautioned. Hawking noted: "I believe what makes us unique is transcending our limits."

Milner said he will contribute $100 million from his own pocket for the project, which could cost as much as $10 billion before it is fully realized. "It's very clear that it's a nonprofit initiative," he joked, acknowledging that the chance for success and the final cost were unclear. Milner, Hawking and Facebook founder Mark Zuckerberg will sit on the project's board. A team has already been working on the endeavor for a year, Milner said.

Initial research results indicate that the giant laser array - the "light beamer" - would require about 100 gigawatts of power, roughly the energy needed to launch a space shuttle, said Avi Loeb, a professor at Harvard University and a project member. "When there is a vision for a grand project like this one, just like the vision that JFK had in the '60s, it lifts many bolts," said Loeb in a nod to former United States President John F. Kennedy, whose vision it was to land a man on the moon.

Milner and Hawking have also previously teamed up. Last July, Hawking launched a massive search for intelligent extraterrestrial life in a $100 million, 10-year project to scan the cosmos funded by Milner.
RELATED TOPICS