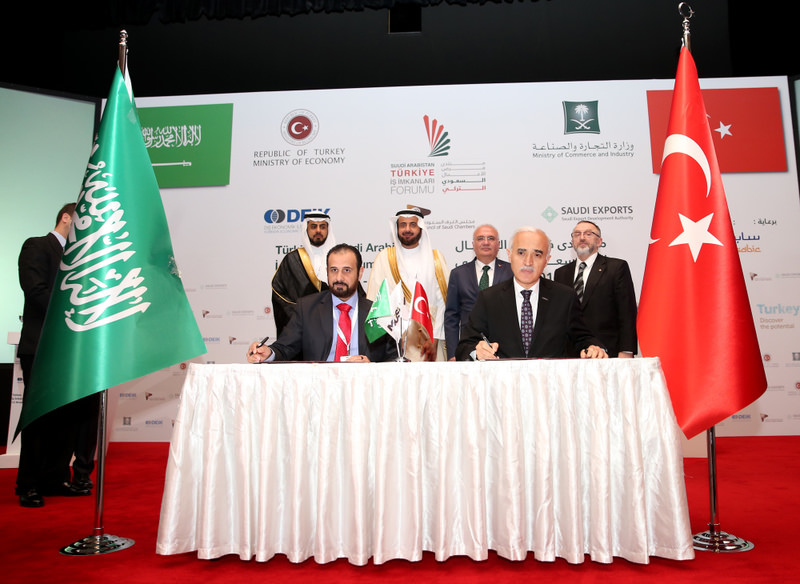 Along with strengthening commercial ties between Turkey and Saudi Arabia, the Saudi-Turkish Business Opportunities Forum, where new business deals were signed, is expected to result in a free trade agreement

Speaking at the opening ceremony of the Saudi-Turkish Business Opportunities Forum organized by the Foreign Economic Relations Board (DEIK), Economy Minister Elitaş urged Turkish and Saudi business figures to hold mutual consultations and stressed the importance of improving commercial and investment ties, emphasizing that in order to improve relations, a free trade agreement should be signed between Turkey and the Gulf Cooperation Council.

New collaborations were signed at the forum between Turkish and Arabian firms, including an agreement between MÜSİAD and the Mecca Chamber of Commerce as well as mutual investment and collaboration agreements in the fields of construction, energy, medical equipment, pharmaceuticals, real estate and capital market ventures.

Turkey's exports to Saudi Arabia reached $3.5 billion in 2015 while imports hit $2.1 billion. Turkey exports woven carpets, electricity materials, iron and steel and furniture components, and imports plastic and manufactured goods, chemicals and base metals. Evaluating the $5.6 billion-trade volume, Elitaş said that this number was behind the potentials of the two countries and a free trade agreement should be signed to improve relations.

Touching on the contracting power of Saudi business, Elitaş said: "We want Turkish business figures to get more of a share in infrastructure and superstructure projects in Saudi Arabia in the upcoming period." Prefacing that they would be glad to see Saudi business in Turkey, Elitaş said that collaboration in tourism is important in order to improve the trade volume, as well. According to Elitaş, the number of tourists coming to Turkey from Saudi Arabia is increasing consistently. While the number of tourists visiting Turkey from Saudi Arabia was 342,000 in 2014, there were 451,000 in 2015. Muslims constitute 22 percent of the world's population and 48 of the world's countries are Muslim majority, but the trade volume among Muslim-majority countries only equals 18 percent of the world trade volume.

Elitaş emphasized that as long as Muslim-majority countries stay united and show efforts to increase trade volume and intimately establish unions that others have established, there would be no country doomed to poverty among Muslim-majority countries and the people of these countries would not need each other's help. Explaining that a working group will be formed in order to improve commercial ties, Elitaş said that they would undersign new developments with Saudi Commerce and Industry Minister Rabiah. Asserting that this forum will make great contributions to the relations between the two countries, Elitaş said he appreciates the support and effort Rabiah has shown to strengthen the ties.
RELATED TOPICS