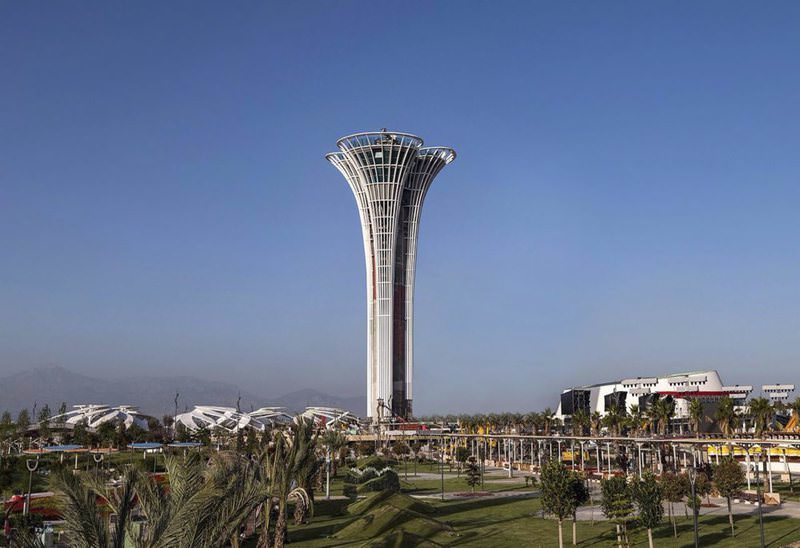 Expected to host more than 8 million visitors, EXPO 2016 Antalya will kick off with the theme 'Flowers and Children' on April 23. A 120-meter tall special tower was built for the fair, which will be officially opened by President Erdoğan

Turkey's first Expo will open its gates on April 23, National Sovereignty and Children's Day, and the opening ceremony will be overseen by President Recep Tayyip Erdoğan on April 22. Emphasizing that the construction of Expo 2016 Antalya, the Middle East's as well as Europe's biggest congress center - along with the tower and Ottoman gardens inside - was completed within nine months, Taca Construction Chairman Tayyar Akkurt said: "The 120-meter tall Expo Tower became the symbol of the project. We completed the Eiffel Tower of Turkey at top speed."

Stressing that the Istanbul Congress Center had been the biggest congress center in the Middle East and Europe with a capacity of 3,500 people up until now, Akkurt said Expo 2016 Antalya broke their own record with a capacity to host more than 5,000 people. The Expo tower, congress center and Ottoman gardens will host international organizations until November. The 120-meter-tall and 2,000-ton Expo tower was constructed with a system that was implemented in Turkey for the first time. Stressing that there have only been four towers in the world built with this system, Akkurt said: "By constructing a four-story, 2,000-ton building with an observation terrace, closed hall and cafe on the ground level, the Expo tower has risen to the sky like a flag with the help of powerful lifting machines and cranes. The construction of the building, which was expected to be finished within two years at least if it were built with classical methods, was completed within nine months. Considering Antalya's geographic characteristics and weather conditions, the best system was conducted at the best time."

According to Akkurt, Expo will be the cure for the recession in the tourism sector, and the project will be a center of attraction. "Thousands of trees were planted. It was really the right investment in terms of tourism. It can revive the tourism potential in a very short time." Akkurt added.

According to Akkurt, they established a joint company with Sheikh Majid Bin Mohammed Bin Rashid Al Maktum's company MBM Holding. "The company is called MATA. We will follow the Dubai market with this [company]. Expo 2020 is a quality business as well. The bidding is expected to be held two or three months later," also adding that they aimed to build 40,000 housing structures in Saudi Arabia.

Emphasizing their $500 million worth of business volume around the world, Akkurt said they had offices in Washington, Tripoli, Dubai, Riyadh and Moscow. "When we complete the planning in Turkey from day to night, the sun rises in America and [the employees there] continue," he said. Besides, in order to rapidly bring out the same quality, we first draw the plans and build later. If there are appropriate finances, every construction project is completed within six months."
RELATED TOPICS