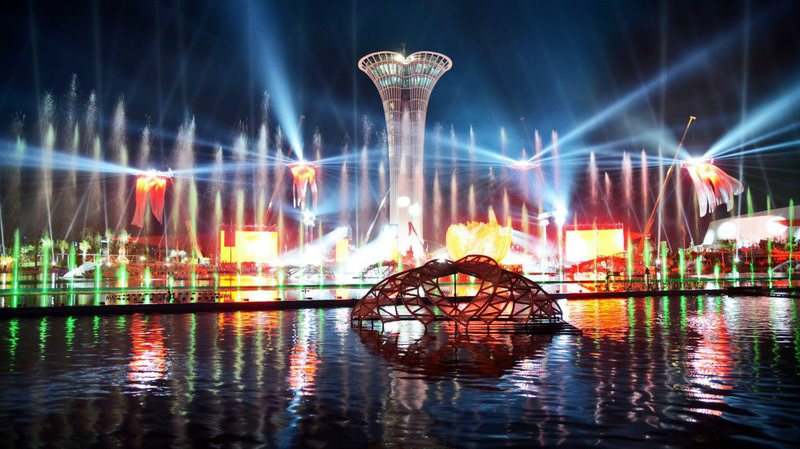 The World Botanical EXPO 2016 started on Friday with the participation of President Erdoğan and Prime Minister Davutoğlu in Antalya. It is expected to contribute to the promotion of the city

The 2016 World Botanical EXPO, one of the largest horticultural shows in the world, began with an official ceremony on Friday in the Mediterranean resort city of Antalya attended by President Recep Tayyip Erdoğan and Prime Minister Ahmet Davutoğlu, who also attended the opening ceremonies of 41 projects in the Kepez district.

Speaking at the commencement ceremony for the 41 projects, Erdoğan spoke of all of the investments made in Antalya by the Justice and Development Party (AK Party) administration. Erdoğan also touched on the importance of EXPO 2016 in introducing Turkey to the world in terms of culture. He added that EXPO 2016, which will last six months, has a permanent effect in that sense. At the opening ceremony, pointing out that the government fulfilled all of its election promises within three months of the Nov. 10 elections, Davutoğlu said the government would always complete investments that it starts. Davutoğlu also talked about new investments to convert Antalya into a smart city able to compete with the world's biggest cities.

The first expo hosted by Turkey in the World Botanical EXPO's 160-year history will last six months, from April to October, taking place on a sprawling, 121-hectare exhibition site.

With the theme: "Flowers and Children" and the slogan: "A green world for future generations," EXPO 2016 aims to display Turkey's history and cultural diversity as well as its rich agricultural and economic potential.

The EXPO 2016 area will host a performance by Turkish stars followed by Sertap Erener's concert in the evening on April 23, National Sovereignty and Children's Day. Children will celebrate the day with dozens of activities at the Science and Technology Center for Children and have fun with the special shows at the small amphitheater.

The EXPO 2016 Antalya is expected to make great contributions to Antalya's international status with various events, as the exhibition area will host performances by world-famous rock, pop and classical musicians.

A concert marathon will begin on May 5 with Maroon 5 followed by musicians and bands, including Deep Purple, the Scorpions, Muse, Sting, Sean Paul, Simply Red, Jose Carreras, UB40 and Status Quo. As the last international performer, DJ David Guetta will take the stage on Sept. 7.

In addition, famous Turkish musicians such as Tarkan, Nilüfer, Sertap Erener, Athena, Murat Boz and Kenan Doğulu will perform as well as international entertainers such as Magicians Without Limits, Phoenix Fire Dancers and Stomp.

Up to 8 million visitors are expected to visit the six-month event. Beside green areas, the expo has a special "Turkey's Eiffel" Tower, a lake, a biodiversity course, kids island, glass bridge, agriculture and biodiversity museum, a science and technology center for children as well as food courts, amphitheaters, watermills, and gardens from each of the participating countries.

Under the auspices of the Presidency, the large expo venue costs TL 1.7 billion ($600 million) and is equipped to host more than 50 countries. This includes China, Japan, Nepal, Sierra Leone, Tanzania, Qatar, Uganda, Mexico, Zimbabwe, Burundi, the Netherlands, Germany, Hong Kong, Senegal, and South Africa, to name but a few.

The expo will also display horticultural varieties and products from abroad, especially vegetation and green culture. There will be 25,000 trees from 120 different species, and besides a 650,000-square-meter green field, there is an 80-square-meter lake on the exhibition site. A space 300,000 square meters has been reserved for visitors.
Last Update: Apr 23, 2016 1:11 am
RELATED TOPICS