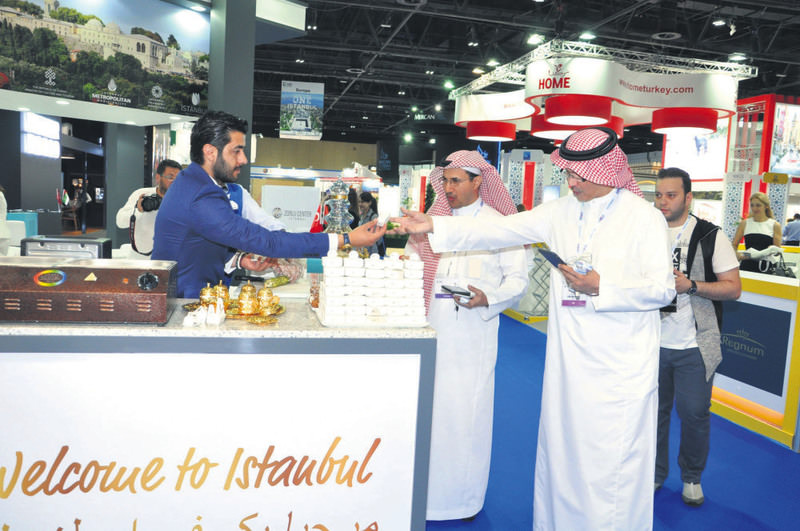 by daily sabah
Apr 26, 2016 12:00 am
One of the largest travel industry events in the Middle East, the Arabian Travel Market (ATM) fair opened its gates yesterday in Dubai, the economic capital of the United Arab Emirates. Attended by the ICC with a special stand this year, the fair is bringing together tourism and travel professionals from 86 countries. During the four-day fair, 2,800 products and destinations will be introduced to 26,000 travel professionals.

The Istanbul Chamber of Commerce (ICC) opened an 85-square-meter Istanbul stand at ATM Dubai for the first time and has rented advertising space at the entrance of the fair as well as inside, welcoming visitors with the slogan, "There is only one Istanbul." There are many activities being organized at the Istanbul stand. Culinary experts will teach visitors how to make Turkish delight and there will be a photography competition on Instagram under the hashtag #oneistanbul. The user who posts the best photo on Instagram using the hashtag will receive a holiday trip to Istanbul.

Stating that 2.15 million tourists have visited Istanbul during the first three months of 2016, ICC Chairman İbrahim Çağlar said: "The number of Middle Eastern tourists we have hosted during the first quarter is more than 420,000, and the percentage of tourists visiting Istanbul who are from the Middle East reached 19.6 percent of all foreign tourists."

Çağlar noted that while the percentage of Middle Eastern tourists visiting Istanbul in 2011 was 11 percent, that number exceeded 20 percent in 2015.

The Culture and Tourism Ministry will represent Turkey at the ATM Dubai Fair; however, many institutions and organizations have provided support with their projects, including the Istanbul Convention and Visitors' Bureau (ICVB), the Istanbul Metropolitan Municipality Lifelong Learning Center, howtoistanbul.com, Atlasjet Airlines, the Divan Hotel, the East Mediterranean International Tourism and Travel (EMITT) Fair, the Mevlana Bazaar, Istanbul Shopping Fest, the Vialand Theme Park and Zorlu Center.
Last Update: Apr 26, 2016 1:07 am