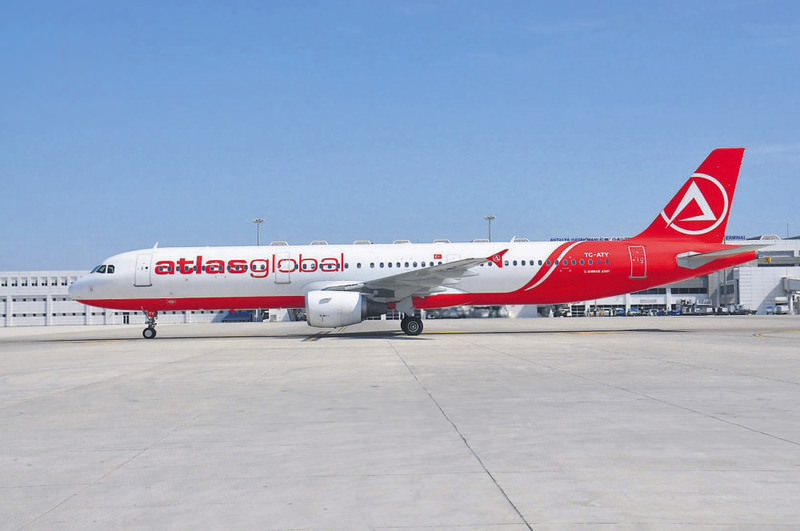 by Barış Ergin Apr 26, 2016 12:00 am
Atlasglobal Airlines, which nearly doubled its international flights last year, is about to establish two new airline companies. Atlasglobal Airlines CEO Murat Ersoy said the new companies will be founded in the Middle East and the Gulf region, adding that the air carrier has focused on providing international flights, in accordance with a decision made a few years ago. Atlasglobal provided flights to just eight countries last summer, and as of July 2016 will fly to 30 countries. Ersoy said, "We launch an average of two new destinations each month. Our connection flights increase, as we arrange our flights in accordance with the rising number of destinations. We connect countries east of Turkey to those west of Turkey."

Ersoy says that because Istanbul offers one hour less flight transfer time than other major airport hubs such as Frankfurt and Dubai, thus flights through Istanbul save airline companies $100 for each passenger. "The government pays regard to Istanbul's geographical advantage for the aviation sector and takes major steps accordingly," says Ersoy. He said the third airport will strengthen Istanbul's position as a transit hub. Touching on the decline in the number of Russian tourists after Turkey downed a Russian fighter jet, Ersoy said investments in scheduled flights must be increased. He added, "This is because governments can cancel charter flights, but not scheduled ones. As long as flights continue, a tourism market will certainly emerge in the region. Airline companies must take risks and shoulder responsibility."

Ersoy assessed the aviation sector, saying that many tour operators have cancelled charter flights to Turkey, seeing it as risky due to recent developments. He stressed that this has caused trouble for European tourism operators, as Turkey constituted 40 percent of tours and Egypt constituted 20 percent. Ersoy says that the two countries experiencing troubles at the same time has made it difficult for tour operators. "From now on, no tour operators will allow any destination to rise above 20 percent. As Turkey, we can free the tourism sector from these troubles by creating alternative destinations."

Atlasglobal Airlines launched flights to Sharjah in the United Arab Emirates, one of the most important transfer points in the region. Sharjah has seen major investments in hotels in recent years and is the third largest emirate in the UAE. Ersoy says Sharjah, 26 kilometers from Dubai, is one of the most important destinations in the region. "Beyond a separate emirate, Sharjah is like a province of Dubai. A number of free zones have been opened in Sharjah, which has become an important trade center."

With reference to costs in the aviation sector, Ersoy said fuel costs have dropped between 20 percent to 50 percent due to the fall in oil prices. He underlined that oil prices will fall to $20 per barrel when Iran and Libya start full oil production, adding, "For us, flight crew constitutes the most important costly item in international flights. Crew costs, which were 25 percent previously, are hovering around 35 percent today." Ersoy stressed the decline in fuel costs render investments in new-generation and energy-efficient aircraft meaningless, continuing, "Due to the purchase of new aircraft, seat occupancy rate this year will drop to 75 percent from 82 percent last year."
Last Update: Apr 26, 2016 1:10 am
RELATED TOPICS