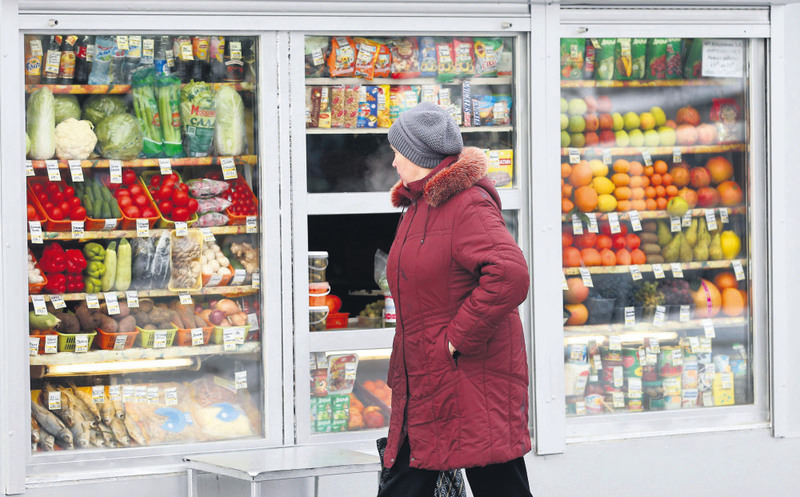 A Russian woman peers through the window to view fruits and vegetables at a street side market in Moscow.
by Barış Şimşek Apr 26, 2016 12:00 am

With the aim of overcoming barriers in the way of Turkish fruit and vegetable exports to Russia, the Food, Agriculture and Livestock Ministry's technical crew went to Russia to eliminate both countries' hesitations

After issuing an embargo on Turkey following the downing of a Russian military jet over the Turkish-Syrian border, Russia's tenacity will be overcome by the Food, Agriculture and Livestock Ministry's technical crew. Upon a written request from Russia, a technical crew of five people led by Food and Control Deputy General Manager Muharrem Selçuk went to Moscow, and they will conduct important meetings in order to solve the issue regarding fruit and vegetable exports originating from Turkey.

Russia's meeting request to discuss the process related to Turkish exports and evaluate the products with the technical crew was positively welcomed by Ankara. On Sunday night, the crew, consisting of Mersin Agricultural Quarantine Director Ali Erden and three officials from the ministry along with Food and Control Deputy General Manager Muharrem Selçuk flew to Moscow.

The Kremlin had previously banned the sale of tour packages and charter flights to Turkey - as well as the importing of certain Turkish goods - after a Russian military jet was downed by a Turkish F-16 over the Turkish-Syrian border on Nov. 24 for repeatedly violating Turkish airspace. In December, Russian President Vladimir Putin signed an order to extend Russian economic sanctions against Turkey. Ranging from food to travel, the sanctions were imposed after Nov. 24.

Turkey is a major trade partner for Russia, whose exports to the country amount to more than $25 billion annually. The foreign trade volume between Turkey and Russia soared from $26.2 billion in 2010 to $31.2 billion by the end of 2014 - a 17.3 percent upsurge. In 2014, Turkish companies invested more than $10 billion in Russia, with the tourism, construction, food, home appliances and banking sectors taking the lead. Turkey functions as a major market that enables Russia to access global markets.

The crew will also meet the veterinary authorities and public health units in the Russian agriculture Ministry. Erden will reassure Russia, which will re-evaluate the products exported from Turkey in terms of their health risks. The directorate that trains the consulting agricultural engineers working at the firms exporting fresh fruits and vegetables from the Port of Mersin to Russia will eliminate any issues related to the products' quality control.

In the aftermath of the Russian embargo, which began on Jan. 1, Turkish exporters embarked on a mission to find new markets and speed up the export to Middle Eastern and African countries. With this move, Turkey's exports were strengthened with new markets. While Turkey had a fresh fruit and vegetable export market worth $83 million before the aircraft downing crisis, the amount declined by $11 million after. The Turkish crew will now attempt to mend relations concerning agricultural exports and restore export levels.

Speaking about the issue, presidency spokesman İbrahim Kalın said: "We sadly follow the wrong statements occasionally made by Russia and its accusations of Turkey. If steps suitable for the government's dignity are to be taken, Turkey is ready. The fact that an agricultural crew is traveling to Moscow is a good step. The relations between Turkey and Russia are not that trivial to sacrifice for an incident; they have depth. We hope that from now on, new steps will be taken in order to provide new opportunities."
Last Update: Apr 26, 2016 1:10 am
RELATED TOPICS