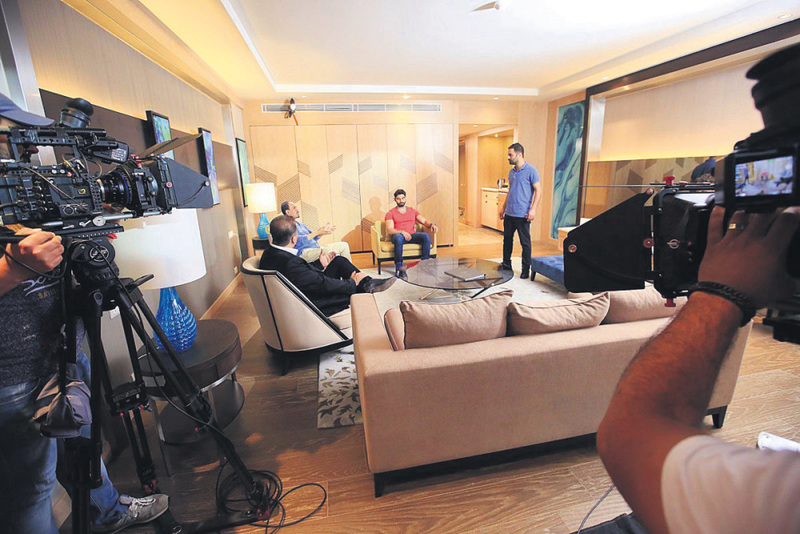 by Pınar Çelik Nacar Apr 27, 2016 12:00 am
The villa that President Recep Tayyip Erdoğan stayed in at the Regnum Carya Hotel during the G20 summit has become a favorite spot for Arab television producers, now being used as a set for Middle Eastern television shows.

The Crown Villa at Antalya Regnum Carya Hotel drew a great deal of attention from Middle Eastern television producers. Turning the villa into a set for a TV show, the producers of "Big House" have been shooting the show with their 60-to-70-man crew for three weeks at the hotel, where they are also staying. The shoot is expected to last three months.

The owner of the Regnum Carya Hotel, Öztürk Group board member Ali Şafak Öztürk, said: "People are coming from Morocco, Syria, Saudi Arabia, Jordan, Lebanon and Dubai to shoot television shows here, especially in the room where President Recep Tayyip Erdoğan stayed. The G20 summit and our president made a huge contribution to the promotion of our hotel. We are preparing new packages in order to increase the number of Middle Eastern tourists." Stating that the number of Arab customers has surged past that of Russian tourists, especially for early reservations, Öztürk pointed to this as the reason they aim to attract more Arab customers.

Pointing to the fact that the percentage of Middle Eastern tourists last year made up 10-15 percent of the total number of foreign tourists, he stated that they aim to increase this number to about 25 percent this year. Öztürk said: "Television crews are coming here with 60-70 people to shoot episodes. A total of 80-90 percent of the show is being shot in this villa."

Stressing that both the number of tourists coming to Antalya and the number of customers at the hotel would increase in this way, Öztürk continued: "A hotel which was chosen especially for its safety during the G20 is very important for foreign tourists as well. That's why our hotel is preferred for accommodations."

During the G20 summit which was held in Antalya's Belek district from November 15-16, the region saw a gathering of the most prominent world leaders. The prices of the hotels where the leaders stayed - including the detailed safety measures that were taken - cost up to TL 30,000 per night. The Regnum Carya Hotel where President Erdoğan and U.S. President Barack Obama stayed was the host of the summit meetings. The hotel did not accept any other guests during the summit. The triple-story Crown Villa, located ina 3,500-meter area which includes its own private garden, accomodated the presidents with a private butler, personal chef and service and cleaning personnel. The room, which even had a PlayStation room, is protected with bulletproof windows and a special CCTV system. Surrounded by high walls, the villa was chosen to host the summit for its top-notch safety measures.
Last Update: Apr 27, 2016 1:23 am
RELATED TOPICS