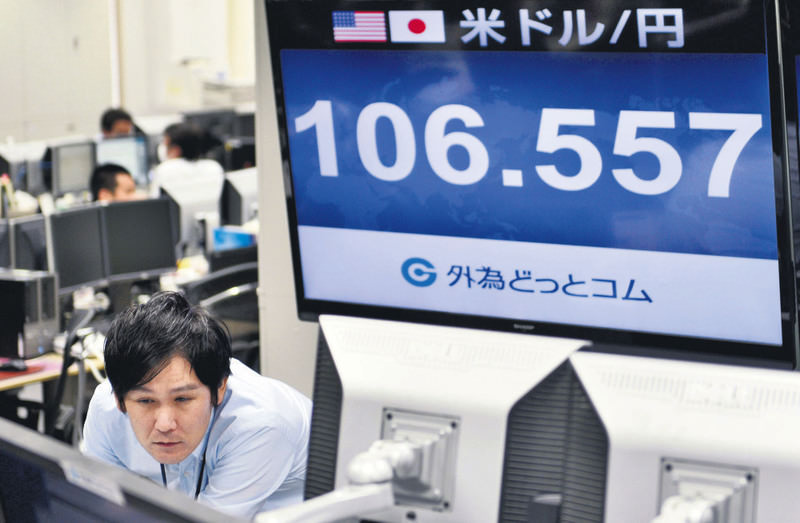 While leaving European and U.S. shares with very limited gains, the decrease in Japanese shares, backed by worries over the policies of the central banks put global markets into a depressed mood

A 3-percent drop in Japanese shares and weakness in the banking sector kept financial markets on edge on Monday, although stock markets in both Europe and the United States were on track for some minimal gains.

With trading thinned by holidays in London and a number of Asian countries, a solid showing for manufacturing sentiment in Germany drove the Frankfurt stock exchange up about 1 percent.

That helped the euro and France's CAC 40, which both gained almost half a percent. Futures markets pointed to a 0.3 percent gain for Wall Street.

Elsewhere the picture showed more of the concern over the banking sector, weak economic growth and over-inflated asset prices that have gripped markets for much of this year.

Brent crude recovered some ground in European trade but was still down 0.3 percent at $47.22 a barrel. The European banking index and MSCI's broadest index of Asia-Pacific shares outside Japan both lost 0.3 percent.

The yen, which tends to gain when investors worry about growth, reached 106.14 yen per dollar in early Asian trade before handing back some of last week's almost 5-percent gain.

That was the yen's biggest weekly rise since the 2008 financial crisis, thanks largely to a Bank of Japan (BOJ) policy meeting that gave no hint of further efforts to stimulate a long-moribund economy with more outright money-printing.

"The BOJ are creating the impression that they will always react too late to deflationary risks. Now that they have disappointed, I think it would take something really new to change the market's mind on the yen."

Adding to the subdued sentiment, a survey released on Sunday showed that activity in China's manufacturing sector expanded for the second month in a row in April but only marginally, raising doubts about the sustainability of a recent pick-up.

Australian shares fell 0.2 percent after disappointing results from Westpac Banking Corp. Australia's central bank board will meet for a policy review on Tuesday and is widely expected to keep its cash rate at a record low of 2 percent, though some economists expect a cut.

Markets in Hong Kong, China, Taiwan, Singapore and Malaysia were closed on Monday. Japan is in the middle of its Golden Week holidays and markets there will be closed on Tuesday, Wednesday and Thursday of this week.

Investors have also turned broadly negative on the dollar in the past two months, worried that the U.S. Federal Reserve will be unable to raise interest rates this year.

"The start of the new month does not mean a new trend. The technical tone of the dollar is weak," Brown Brothers Harriman's global head of currency strategy in New York, Marc Chandler, said in a note to clients. "The Federal Reserve acknowledges the continued improvement in the labor market. The problem is that it has not translated to stronger consumption, and business investment remains soft."