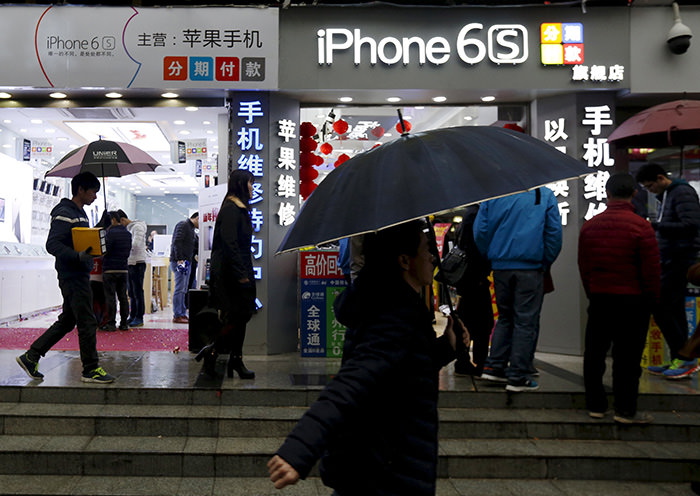 A Chinese court has ruled against Apple in a case it brought against a small maker of "iphone"-branded leather goods, state media reported.

Manufacturer Xintong Tiandi registered the word as a trademark for use on leather goods in 2007 and has been producing wallets, handbags and phone cases emblazoned with it ever since.

Intellectual property rights have long been a bone of contention between Western countries and China, where counterfeiting is rife.

Apple has used the "i-" prefix for years and spends vast sums on marketing around the world. Its first iPhones were produced in 2007, but the wildly popular device was not first officially sold in China until 2009.

The firm took Xintong Tiandi to China's trademark commission in 2012 and then to court, losing the initial case the following year.

On appeal the Beijing municipal higher people's court ruled Apple had failed to prove that the iPhone brand was "familiar to the public and widely known" in China before the leather company registered it, the People's Daily newspaper, the official mouthpiece of the Communist Party, reported Wednesday.

As such Xintong Tiandi did not violate the country's trademark law, it said.

The report came after Apple's iTunes Movies and iBooks service became unavailable in China two weeks ago, reportedly shut down at the demand of state censors less than seven months after they launched in the country.

It also followed Apple's first quarterly revenue decline since 2003 as the company faces slowing growth in the world's second-largest economy.

Greater China is a key market for Apple but its sales in the area fell 26 percent year-on-year in the first three months of 2016, and it has previously been targeted by state-run media over issues such as service and pricing.

Apple did not immediately respond to a request by AFP for comment on the court ruling.

Following the decision, Xintong Tiandi posted on its website a statement saying: "The 'iphone' brand can blossom widely outside Apple."

As a small Chinese small company, it said, "we will take the 'iphone' marque to its pinnacle, and together bring more benefit to the community of 'iphone' consumers!"