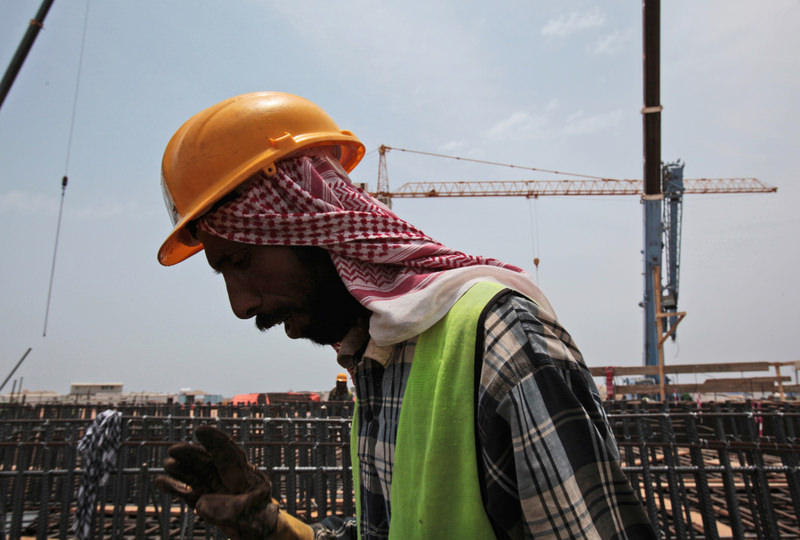 A man works on the construction of Kingdom Tower, a planned 252-story building, which would be the world's tallest skyscraper when complete, in Jiddah.
by May 04, 2016 12:00 am

Binladin Group issued 77,000 final exit visas to foreign workers so that they can leave Saudi Arabia and is expected to lay off 12,000 of 17,000 Saudis in supervisory, administrative, engineering and management jobs

One of Saudi Arabia's most powerful firms, the Saudi Binladin Group, has laid off 77,000 foreign workers, a Saudi daily reported on Monday, citing an anonymous company official. Saudi Binladin Group confirmed to AFP that some staff have been let go, but gave no numbers.

The report in the Saudi newspaper Al-Watan is the latest alleging tens of thousands of layoffs, unpaid salaries and unrest by employees of the firm, which built some of the Gulf country's landmarks. Sources in March told AFP that delayed receipts from the government, whose oil revenues have collapsed along with oil prices over the past two years, have left employees of the kingdom's construction giants struggling to survive while they await their salaries.

However, Saudi Binladin Group was also sanctioned by the government after a deadly crane accident in Mecca last September.

"The size of our workforce is always appropriate to the nature and size of projects and the timeframe they are to be carried out by the group," Yaseen Alattas, a Saudi Binladin Group spokesman, told AFP. He said workforce changes would be normal "especially when some projects have ended or are about to end." Most of the jobs eliminated "are on specified term contracts" for particular projects, Alattas said in an email.

An unnamed company official cited by Al-Watan said that as of Sunday 77,000 Binladin Group workers had received exit visas. He added that they were among 200,000 expatriates employed by the company, one of the largest construction companies in the world. In addition, 12,000 out of the 17,000 Saudis working for the firm as engineers, administrators and inspectors were expected to be let go, the source said. On Friday, Al-Watan reported that 50,000 of the group's staff were refusing to leave the country, while their salaries remained unpaid after more than four months. Another Saudi newspaper, Arab News, on Sunday cited Saudi Binladin Group employees as confirming "massive layoffs."

An Arab News report on Monday blamed "unpaid workers" for torching several Binladin Group buses in Mecca over the weekend. Authorities confirmed seven buses were burned but did not give the cause. Egyptians account for a large percentage of Binladin Group employees.

Some complained to Egypt's labor ministry that their salaries had not been paid for three months, Arab News reported in March.

A well-informed source told AFP in March that "because of delays in payments from the government administration, several companies today have problems... paying both their employees and producers."

Minister of State Mohammad bin Abdulmalik Al-Sheikh told Bloomberg News in an interview published on April 4 "that all, or 95 to 98 percent of all arrears, will be paid" within two weeks.

The Saudi Binladin Group was founded more than 80 years ago by Mohammed bin Awad bin Laden, whose 126 children included al-Qaeda leader Osama bin Laden, killed five years ago by US Navy Seals. The construction firm he founded developed landmarks including the domed Faisaliah Tower in central Riyadh and the Mecca Royal Clock Tower, one of the world's tallest buildings. After decades of thriving on lucrative government contracts, the company faced unprecedented scrutiny after one of its cranes - working on a major expansion of the Grand Mosque in Mecca, Islam's holiest site - toppled in September. At least 109 people died, including foreign pilgrims, leading King Salman to suspend the firm from new public contracts. This has been a factor in the firm's economic difficulties, a well-informed source has told AFP.
RELATED TOPICS