Services in Greece grind to halt in 3-day strike 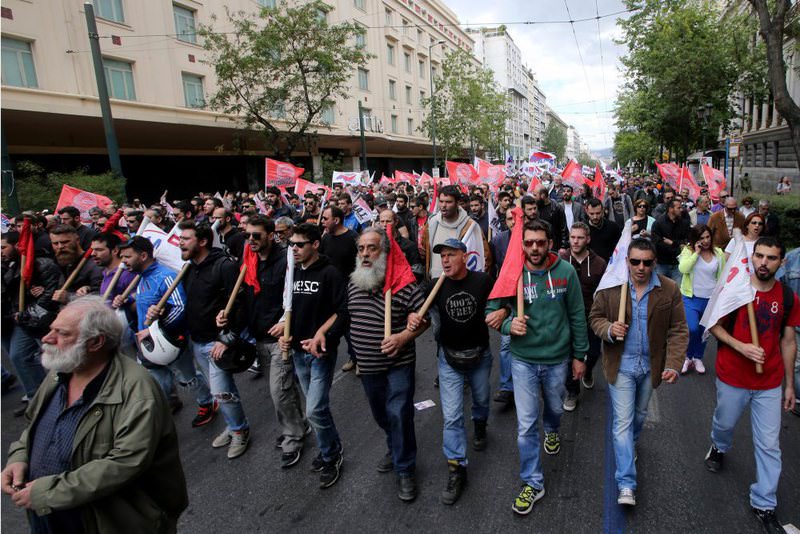 by Associated Press May 07, 2016 12:00 am
Services ground to a halt in Greece on Friday as workers walked off the job at the start of a three-day general strike protesting new bailout austerity measures they say will further reduce incomes.

Several thousand demonstrators gathered in central Athens for planned rallies as part of the protests, which show a growing discontent with the left-led coalition government.

Unions on Thursday called the 48-hour strike, which will add to a previously declared strike on Sunday. State-run and many private services, including garbage collection, public transport, municipal offices and news broadcasts were suspended.

Ferries to and from the Greek islands would not operate until Tuesday morning. Doctors, dentists and journalists joined the strike, leaving state-run hospitals functioning with emergency staff and all news broadcasts off the air, while lawyers have abstained from court appearances for months.

The strike was timed to coincide with the parliamentary vote Sunday night of a bill overhauling the pension system, a reform proposed by the government under requirements for Greece's third international bailout.

The vote will test Prime Minister Alexis Tsipras, who initially came to power in January 2015 on promises to repeal austerity measures previous governments had imposed as part of requirements to overhaul the economy and qualify for international rescue loans.

Tsipras' government has a majority of just three seats in the 300-member parliament, and has lost its lead to opposition conservatives in opinion polls amid mounting voter disillusionment.

"Everything the unions are doing now is to justify their existence. Absolutely nothing will change," Athens resident pensioner Constantine Andreopoulos said. "And those who came to power after 50 years will not risk their seats. They're not stupid. They will do anything, even sell their souls to the devil."

After months of tumultuous negotiations with Greece's international lenders — other European countries that use the euro currency, and the International Monetary Fund — Tsipras called a referendum and new elections last summer, dropping his anti-bailout stance and signing up instead to a third program of rescue loans.

The planned pension reforms, under which workers will pay higher contributions, have triggered months of protests, including highway blockades by farmers.

The government insists the reforms will create a fairer system and end years of political pandering to powerful labor groups. Greece has been hammered by six years of austerity measures after its collapsing finances locked the country out of international borrowing markets in 2010. About a quarter of the workforce is unemployed.

Talks on further reforms as part of the country's third bailout have been dragging for six months, delaying the payout of vital bailout loans. Eurozone finance ministers are to hold a special meeting on the Greek program in Brussels on Monday.
RELATED TOPICS