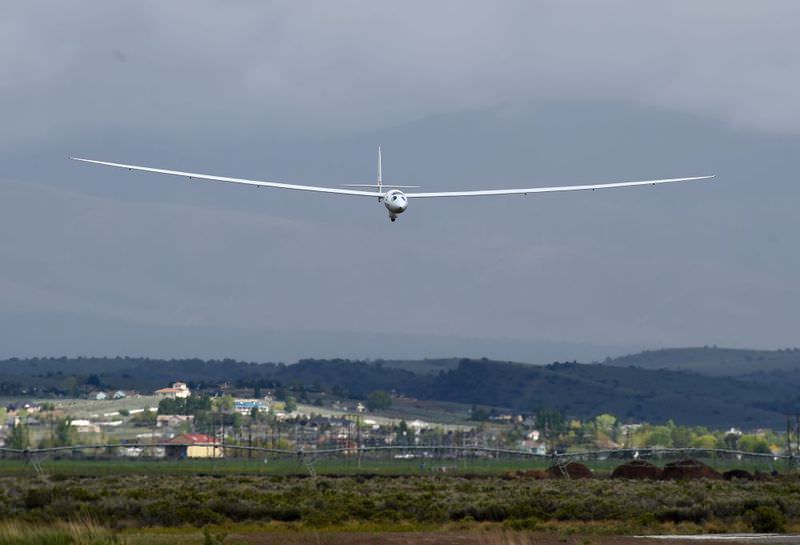 by May 09, 2016 12:00 am
Airbus completed a test flight Saturday of a glider set to eventually travel to the edge of space, in a pioneering step into the stratosphere. The Perlan 2's flight, from an airstrip in the western U.S. state of Nevada, took place two hours after the planned start time due to heavy rain. It lasted just a few minutes - instead of 30 minutes to two hours as scheduled - because the aircraft is considered more efficient in dry weather, according to chief pilot Jim Payne.

"It was short," said chief executive Tom Enders, who served as co-pilot, said after exiting the plane. "Because of the clouds, we couldn't see anymore, otherwise we would still be up there."

The flight, part of a series in recent months from the mountainous area just east of the Lake Tahoe resort, aims to test how well an aircraft and its crew can fare in conditions similar to those on Mars, with extremely thin atmosphere and bitterly cold temperatures.

Airbus, supporting the Mission Perlan 2 group that launched the ambitious project, aims to test every aspect of the unpowered aircraft, flying it at various speeds and altitudes and subjecting it to different scenarios of stress and vibration. Its designers hope to show that the lightweight aircraft, with its extremely long, thin wings, is strong enough to resist intense stresses that could destroy a less solid plane.

In the end, only stability, speed and efficiency were tested, as the plane flew at just 7,000 feet for its brief journey.

"The airplane is very stable. We got what we called dead-beat response, so the way we like it," said Payne.

Designers, drawing on computerized simulations, plan to induce high-frequency vibrations to the wings to see if the glider itself can contain those vibrations at safe levels.

Ed Warnock, chief executive of the Perlan group, said his team wants to test whether it is possible for the crew to breathe only the air inside the craft without condensation damaging instruments or causing windows to fog up. "We have to control it," he said.

The Perlan 2 project has pulled together top aerospace experts and aviation engineers to develop its space glider. Airbus, which hopes to build planes capable of flying at altitudes above those now used - potentially saving time and fuel - is earmarking up to $4 million for the project, making it one of the largest investors.

The glider, with a wingspan of 90 feet and a weight of only 1,800 pounds, is designed to ride updrafts to an altitude of up to 90,000 feet, even though air density at that height is only two percent what it is at sea level.

The craft's cabin is supposed to maintain pressure equal to that at 15,000 feet, saving the crew from having to wear bulky flight suits, Airbus said.

Perlan 2 also aims to collect atmospheric data useful in fighting climate change as it travels to the edge of space.

The Perlan team hopes the test flight this weekend will keep it on track to break the previous altitude record of 85,000 feet set in 1976 by the SR-71 Blackbird, a US Air Force reconnaissance plane built by Lockheed, Warnock said. The attempt will come after the Perlan 2 team moves to Argentina later this year.

Air currents there have been powerfully bolstered by the polar vortex all the way to the stratosphere, and currents rising from the Andes are particularly strong. The air drafts that carry a craft like Perlan 2 skyward are strongest in mountainous regions. However, said Warnock, "We can't take the plane to Argentina until we know it's perfectly safe."

Europe's Airbus group, by supporting a project that harks back to the golden age of space exploration, has hoped to link its name to the sort of innovative aerospace work being carried out by the American billionaires Elon Musk (SpaceX and Tesla) and Jeff Bezos (Blue Origin, Amazon) as they duel to develop new launch vehicles.

To get a craft and pilots weighing a total of roughly a ton "to the edge of space without using any rocket fuel," said Warnock, "that's innovative."
RELATED TOPICS